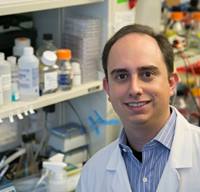 Dr. Sowalsky is currently the Head of the Prostate Cancer Genetics Section at the NIH National Cancer Institute. His new focus of research is in detecting circulation tumor DNA or cell free DNA from a primary tumor and examining a correlation with prostate cancer progression.

Dr. Sowalsky's long-term research interests are to use a combination of laboratory research and emerging technologies to understand the molecular basis for progression of disease with respect to the genetic alterations that occur in cancers. Of particular interest to him is the contribution of the tumor microenvironment and its role in supporting or preventing the acquisition of malignant properties by the tumor. His research focuses on the progression of primary prostate cancer.

Men are diagnosed based with prostate cancer based on their biopsy's Gleason score, a sum of the two most common Gleason patterns (from 1 to 5) that describe tissue appearance and is used as a prognostic indicator for aggressiveness. The most common Gleason score is 6 [Gleason pattern 3 + Gleason pattern 3 (G3)], which lends itself to the most favorable prognosis. Upon diagnosis of G3 cancer, the patient may undergo a radical prostatectomy (surgical removal of the prostate) or delay surgery and enter active surveillance, where periodic biopsies monitor lower-risk, possibly indolent, cancer. In a small percentage of men who choose surveillance, repeat biopsy may show Gleason score 7, which indicates development of Gleason pattern 4 (G4), which has a much less favorable prognosis. 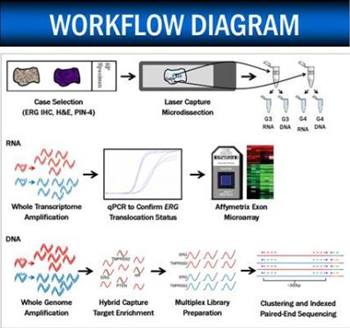 Due to uncertainties of biopsy sampling, it is impossible to determine whether this G4 represents progression of G3 cancer biopsied previously. However, using laser microdissected samples of adjacent G3 and G4 cancers from prostatectomies (click on diagram for a larger image), it has been found that some G3 cancers can indeed progress to G4, and we hypothesize that when G3 progresses to G4 it is biologically distinct from G3 that does not progress. By comprehensive molecular analysis of clonal G3 and G4 cancers he is examining mechanisms of progression. It is the hope that the results of these studies will have implications in the treatment of men recently diagnosed with G3 prostate cancer, improving early detection of higher-risk disease. Determining mechanisms of progression from G3 to G4 will also identify potential novel therapeutic targets for prevention or treatment.