Department of Obstetrics and Gynecology

Residency in Obstetrics and Gynecology: Curriculum

The majority of rotations during the four years of residency are either four or eight weeks in duration, each focusing on progressive responsibility within the framework of the ACGME milestones and sub-competencies. In the last year ("chief year") of your training, you will serve as the leader of each service. 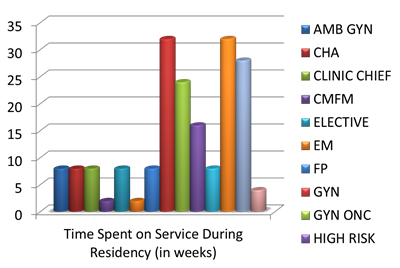 The rotation at Cambridge Health Alliance is an eight-week rotation in the PGY 3 that allows the resident to practice as a generalist practitioner in the community setting, while leading junior Family Medicine residents, medical student and Physician Assistant students. During this rotation the residents begin to work more autonomously in preparation of their chief year when they will become a leader.

Clinic Chief is an eight-week rotation in the chief year of the program during which the resident has their own weekly pre-operative clinic, from which patients will be booked for surgery, with the resident as the primary surgeon under the guidance of our dedicated surgical teaching staff. Additionally, this resident is the point person for junior residents and nursing in the clinic setting.

This two-week rotation takes place during the PGY 1 in the Center for Maternal-Fetal Medicine, during which the resident works closely with faculty and sonographers to hone their obstetrical ultrasound skills.

Each resident spends a four-week block in the PGY 2 and PGY 3 years (eight weeks total) during which they have protected time to work on scholarly projects, travel abroad for global health electives or pursue subspecialty electives at outside institutions locally or nationally. 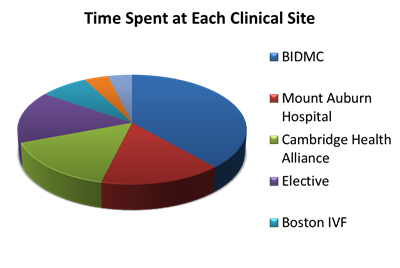 Each resident spends two weeks in their PGY 1 working in the Emergency Department under the guidance of that program's leadership to expand the breadth of their knowledge to prepare them for all aspects of women's health beyond obstetrics and gynecology.

The Division of Family Planning offers two four-week rotations in the PGY 1 and PGY 2 years as part of the national Kenneth J. Ryan Residency Training Program. Residents learn to provide all methods of contraception and to address the family planning needs of women with complex medical conditions. Residents may perform ambulatory procedures including manual vacuum aspiration, dilation and evacuation, medical abortion, and intrauterine device and contraceptive implant insertions.

The Ambulatory Gynecology rotation consists of two four-week blocks in the PGY 2 where the resident is immersed into all the subspecialty ambulatory clinics such as colposcopy, gynecologic minor procedures and urogynecology.

Residents spend eight weeks each year dedicated to the gynecology service. After learning the basics of ambulatory and in-patient gynecologic care, residents spend progressively more time in the operating room culminating with taking a junior resident through procedures in their chief year. While on the gynecology service, trainees spend time with our highly-skilled faculty in minimally invasive gynecologic surgery, urogynecology, colposcopy and vulvar specialists and even transgender healthcare providers. Each resident will be FLS-certified by the time they graduate.

Residents work on this bustling and expanding service, treating patients from all over New England thanks to community ties and our maternal transport program. Time is spent in the Center for Maternal-Fetal Medicine diagnosing and counseling patients with complicated pregnancies, as well as on the floors and on Labor and Delivery assisting in high risk deliveries. Additionally, residents will treat and operate on patients from our New England Center for Placental Disorders.

Each PGY 3 resident spends eight weeks at Mount Auburn Hospital in Cambridge working alongside their faculty gynecologists and urogynecologist to grow their surgical skills by assisting on complex gynecologic surgeries with an emphasis on minimally invasive vaginal and robotic approaches.

Each resident spends two four-week blocks per year on the nights rotation working closely with three of their co-residents. The first year resident sees to all post-operative and non-obstetrical inpatients. The second year resident begins to strengthen their leadership skills by running the board on labor and delivery, and participating in cesarean sections. The third year resident guides the first year resident, participates in operative deliveries and attends hospital-wide consults. The chief resident on nights has oversight of the entire patient census, provides guidance to the second year resident, attends chief service patient deliveries and emergency surgeries, and acts as educator to the junior residents and students.

Residents will spend two four-week blocks in the PGY 1, 2 and 4 years on Labor and Deliver, where nearly 5,000 births take place every year. During this busy rotation, residents perform vaginal, cesarean and operative deliveries while working with several faculty and midwifery practices. During this rotation residents learn to triage, oversee a busy service and how to coach women through their deliveries.

During this four-week rotation, PGY 2 residents participate in all clinical services at the program’s principal site, Boston IVF. Boston IVF is one of the largest assisted reproductive technology programs in the United States, with faculty assisting in more than 35,000 births. The residents’ clinical experience includes evaluation and management of new patients and those returning for consultation. Residents acquire skills performing ultrasound, sonohysterograms, and hysterosalpingograms; they also assist in ambulatory surgery and advanced reproductive technology procedures.