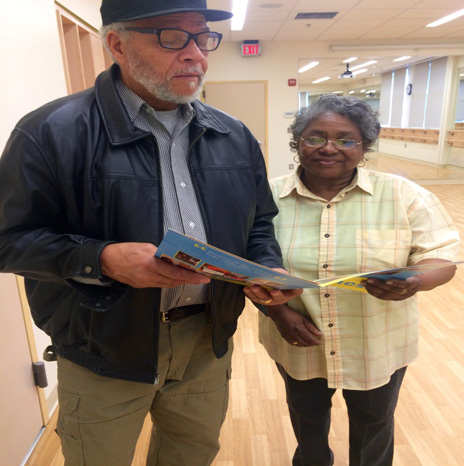 Two of the Wellness Center’s original members reflect back on their first year of enrollment, and how they discovered an unexpected prescription for health.

Atanasio Rosa and Margaret Lowe smile as they look back through the Wellness Center design specs layed out in the original campaign portfolio. Standing in the Activity Room where they once moved conference room tables and chairs to be able to exercise, the feeling of coming full circle radiates as they remember their journeys over the past year.

Rosa and Lowe are only two of a larger cohort of patients who elected to join the Wellness Center and its initial activities while the full facility was still under construction. “We’ve done Tai Chi in several rooms of the health center now!” Lowe laughs, recalling the pilot class’ ever-changing room trajectory to avoid construction sites. “It is fun to think about how much we’ve already done, even though the Wellness Center didn’t even officially open until this past May!”

Indeed, the pair along with their fellow members who joined in January 2015, have participated in classes ranging from weight training and Tai Chi, to cooking demonstrations and specialty group visits. Often several times per week! When asked what motivated them to join the Wellness Center in the first place, having only seen drawings of a facility yet to materialize, they both acknowledge that there were several good reasons to take the leap of faith.

Rosa sites convenience as being a huge factor; as a patient and a local resident he knew he would appreciate the proximity of the activities to his home, and that the span of class offerings throughout the day would accommodate his busy schedule. Lowe recalls that her membership enrollment decision was due in part to how excited and invested health center staff seemed for the new addition, even though the space hadn’t even been built yet.

“It’s easier to join a new activity in a place that you trust,” she says. “Instead of having to go somewhere where you aren’t familiar with anything. It is nice to have your doctor working in the same place where they want you to try new things”. She adds that this sense of trust also played into her decision to sign up quickly and not delay taking action to improve her health. “When I first signed up, I thought it would be good for my overall health. I had a lot of problems with my shoulders and with my back, and I thought that signing up right away would be a good way to try some activities to help me with these things.”

A variety of classes now under their belts, Rosa and Lowe can’t decide which has been their favorite. They do agree, however, that the benefits of joining the Wellness Center in general are tremendous.

“There are too many benefits to name!” Rosa says. “All the classes are helpful in different ways, and I feel like we are always learning. Sometimes when I’m at home, I practice what I learn in class.” Lowe adds that she feels her own overall health has improved a great deal and that she enjoys attending class each week. “It’s fun!”

But both say that perhaps the most unexpected benefits thus far have been the friendships that have formed between members; friendships deemed worthy of warranting their own designation as “prescriptions for health” because of how significantly they have impacted members’ feelings of wellbeing. “You make so many new friends,” Lowe says. “And that is something just as important to your health as exercising or learning to cook”.

The sense of camaraderie between members, both seasoned and new, carries with it an unspoken understanding of trust and non-judgment; people are welcoming and supportive and recognize that wellness means something different to everyone. The shared goal across all members is simply to come as you are, and leave happier.

“You get a special feeling as soon as you walk into the room,” Rosa says as he waves good morning to his classmates. “I’m excited for what’s going to be next.” And so are his friends.