Chapter 2: A Lifelong Passion and a New Approach 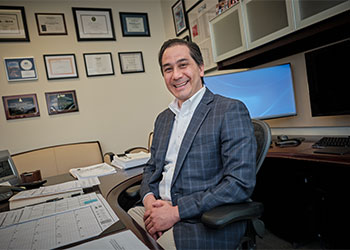 Improving human health and saving lives on a global scale has been the focus of Barouch’s entire career. “I’ve always believed in the power of science to transform lives and to solve problems,” he says. With deep intellectual curiosity and a strong work ethic, Barouch has always been ahead of the curve—he graduated from Harvard College at the age of twenty. Following his doctoral studies in immunology at Oxford University in England, Barouch became a postdoctoral student and then a faculty member at BIDMC, launching his own independent lab in 2004—he is among the institution’s youngest to do so. Barouch had an ambitious, steadfast vision for his research: to develop a vaccine for HIV. “I've always been interested in vaccination as potentially the most important tool we have to combat infectious disease,” says Barouch. To achieve this goal, Barouch and his team worked to create an innovative HIV vaccine that was made from a common cold virus, adenovirus serotype 26 (Ad26), as their Trojan horse.

One of Barouch’s key team members is CVVR staff scientist Joseph Nkolola, PhD, who also trained at Oxford and joined the lab as a postdoctoral fellow in 2007. Having grown up in Zambia, Nkolola has seen firsthand the devastation caused by HIV and was determined to put his passion for science to use. “For me, this work is very personal—it translates to reducing human pain, suffering, and death,” says Nkolola. For years, he and other Barouch lab members worked to edit the Ad26 virus so it would not make the vaccine recipient sick, and would prime the immune system to fight the infection. Today, a vaccine candidate they developed with longtime collaborator Janssen, a pharmaceutical research arm of J&J, has been shown to offer protection against HIV in monkeys. It is currently the only HIV vaccine—which has been elusive for nearly four decades—being tested in a large-scale, global clinical efficacy trial.

Because of their extensive experience developing vaccines, the team had an infrastructure in place that was critical in their COVID-19 efforts. In other words, they did not have to work from scratch, but instead rewrote their existing playbook. This is not new to the Barouch lab—over the last five years, the team was also able to borrow from their HIV vaccine work to develop vaccine candidates for both the Zika and Ebola outbreaks. In both instances, they worked from their Ad26 vaccine platform with colleagues from Janssen. "We were able to build on our previous vaccine research against other pathogens," says Barouch. "That prior work allowed us to move forward at an unprecedented pace without sacrificing any of the established safeguards for vaccine development."