Alana Kapust always suspected her chances of getting breast or ovarian cancer one day were high. Her aunt passed away from ovarian cancer at age 34. Her mother was diagnosed with breast cancer around the same time and battled second and third rounds of the disease years later. After her mother and grandfather both tested positive for the BRCA1 gene mutation, they encouraged Kapust to be screened for the cancer-causing abnormality, which can be passed down through generations. When her tests also came back positive, Kapust sought the guidance of Nadine Tung, M.D., director of the Cancer Genetics and Prevention Program at Beth Israel Deaconess Medical Center. “I went from not knowing but having this feeling of inevitability of cancer to having Dr. Tung create a plan with me,” says Kapust, who had ultimately inherited a 90 percent chance of developing breast cancer and a 50 percent chance of developing ovarian cancer. Before age 30, with the support of Tung and her team, Kapust chose preventive surgery—an oophorectomy to remove her ovaries as well as a double mastectomy—effectively eliminating her likelihood of getting ovarian or breast cancer in the future. “Being able to identify who in a family is at risk and who is not at risk is an enormous achievement,” Tung says. “Alana’s mother and aunt were blindsided. But Alana, she knew that she was at risk for these cancers, and that put us in the driver’s seat.” 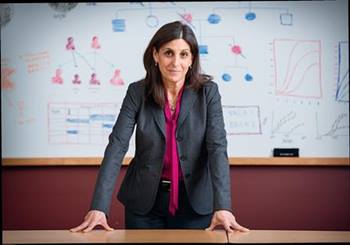 When researchers discovered that mutations in BRCA1 and BRCA2 genes caused an inherited risk of breast and ovarian cancer 20 years ago, it was a game changer for clinicians and their patients. BRCA genes, which are present in every individual, produce proteins that suppress tumors, ensure the stability of the cell’s genetic material, and repair DNA that has been damaged. When mutated, the gene does not function properly and ultimately makes the body’s cells more prone to cancer. The mutated BRCA1 and BRCA2 genes confer an increased risk of developing several particular types of cancer in men and women, including breast, ovarian, melanoma, pancreatic, and aggressive forms of prostate cancer. Upon further study, the impact of these mutations on clinical care expanded from just being able to predict who is at risk for cancer to how to manage that risk and treat the cancers that develop in those individuals more effectively. “For the first time we were able to really fine-tune risk assessment, tailor strategies for risk reduction, and deliver personalized care for these individuals and their families,” Tung says.

But along with the promise this type of genetic testing holds for so many in understanding and managing their health come concurrent challenges in fulfilling that promise. One of the dilemmas facing this relatively new field is how to conduct large-scale testing effectively given the current shortage of genetic counselors and limited resources. Tung and her colleagues believe that the solution may lie in technology. Traditionally, genetic testing involves in-person sessions between individual patients and genetic counselors both pre- and post-test. But given that the vast majority of those tested for rare mutations like BRCA will not have a genetic abnormality, what would happen if live counselors were reserved for the patients who need them most, when they need them most? “We want to show that by using our limited counseling services more wisely and augmenting their efforts with technology, we can improve the genetic testing process more broadly,” says Tung. “This could be the way to responsibly and efficiently offer this testing to all individuals who really need it.”

The initial phase of the project will examine 1,000 Ashkenazi Jewish women and men, ages 25 years and older, in each of the four participating cities: Boston, Los Angeles, New York City, and Philadelphia. A larger second phase of the study could potentially explore the feasibility of a nationwide genetic testing and counseling program for the nearly 3.5 million people in the country of Jewish heritage, and in the process, serve as a model for the implementation of population genetic testing strategies in the future. “For BRCA mutations, it was logical to start with the Jewish community,” notes Tung, who will lead the project at BIDMC. “But we have an opportunity here to understand how to do this work in the best and most conscientious way possible and then apply what we learn to other medical conditions and other populations.” 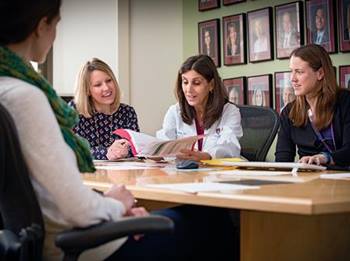 The integral link between BRCA mutations and the Ashkenazi Jewish population offers the researchers an almost ideal platform from which to launch their efforts. Current estimates indicate that one of every 40 Jewish individuals of Eastern European descent, or Ashkenazi Jews, has a mutation in the BRCA1 or BRCA2 gene, compared to one in 800 in the general population. “BRCA1 and BRCA2 mutations are 10 times more common in those of Jewish ancestry, and three recurring mutations explain almost all of the abnormalities,” says Tung. “This makes testing simpler than in other populations.” But currently, genetic testing for these mutations is only recommended for individuals with a personal or family history of breast or ovarian cancer. And unlike Alana, half of Jewish individuals who are diagnosed with cancer and ultimately found to carry the mutation have no family history. Unsuspecting carriers may simply not know that cancer runs in the family, or they may have inherited the mutation from their fathers and thus have few women in the family with cancer—and consequently have no warning of what’s likely to come. Today genetic-screening and insurance-carrier guidelines endorse testing these patients for the mutations only after a cancer diagnosis, denying them the opportunity to determine their risk and take steps to prevent their disease. “Research has shown that, if you are Jewish, the risk for breast or ovarian cancer is virtually the same for everyone with a mutation regardless of whether you meet the established criteria for genetic testing,” says Tung. “To rely on family history in a population in which these mutations are so common is not a good strategy.”

Extending genetic testing to more at-risk patients in a resource-efficient way could offer an elegant solution to this conundrum while at the same time provide insights into the complexities of genetically screening large patient populations. The BFOR study will evaluate the feasibility of offering BRCA mutation testing to Ashkenazi Jewish men and women across the United States regardless of their family history using a digital platform. A primary goal of the study is to evaluate the effectiveness of using technology for pre-test counseling and saving in-person counseling services for those who have a mutation—only 2.5 percent of Jewish individuals tested—or those who require more extensive testing—individuals without a BRCA mutation who have a strong family history of cancer. Participants will use an online video to complete a standardized pre-test counseling program and provide consent to genetic testing electronically. They will have the option to receive their test results from their primary care physicians, if those physicians choose to participate, or from members of the study team. If their results are positive, subjects will be offered live consultations to help make the health management decisions best for them. The project will assess patients’ comfort with standardized pre-test counseling, primary physicians’ comfort with disclosing genetic test results, and whether appropriate screening and prevention strategies are followed.

But widespread testing does not come without costs. The team is grateful that Quest Labs and Lifelink, a California-based digital health company, have donated their services for blood testing and database management, respectively, for the pilot study, and that the Breast Cancer Research Foundation has been a philanthropic leader in supporting this research. However, each site is responsible for hiring necessary personnel, such as research staff, genetic counselors, and technology consultants, as well as conducting public outreach.

Recognizing these gaps in resources, former chair of the BIDMC Board of Directors Steven B. Kay and his wife, Lisbeth Tarlow, hosted an event at their home last spring featuring members of the Boston Symphony Orchestra, which raised both funds for and awareness of this project. “We know the testing is being done for free, but we need personnel who can help navigate all the complexities of this research and promote it to the appropriate populations,” Tung says. “The more we learn and the more people we can reach, the more people we can help.” As a doctor who has treated patients with breast and ovarian cancer for more than 25 years, the end result is all that matters—providing the best care possible to those in need. Her hope is that she can make patient experiences like Alana Kapust’s more commonplace. “Being able to identify these mutations in individuals who would not have received genetic testing otherwise is about saving lives,” she says. “It is not just the individuals who test positive. It is their children, their siblings, their nieces, and nephews. It is about saving families.”