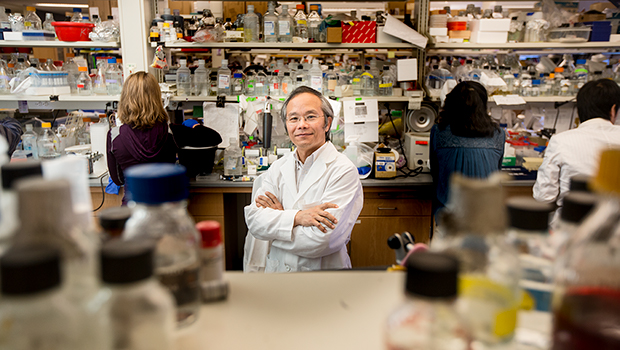 Throughout his longstanding career in medical research, Kun Ping Lu, M.D., Ph.D., has trusted his instincts and pursued each lead as it surfaced, wending his way through a variety of complex biological systems and pathways. But even as he moved from one phase naturally to the next, one guiding element has remained at the heart of his work—the patient. "The idea of research is a moving target," says Lu, chief of the Division of Translational Therapeutics at BIDMC. "When you open a new field, there are a lot of unknowns, and we constantly have to think of ways to solve this problem or that problem to move the field forward. Even now, we are discovering something new every day, but our goal, ultimately, is to treat disease and improve health."

On this circuitous path, Lu and his team have made some critical discoveries about the underpinnings of age related diseases that not only inform our understanding of how and why they develop but may shape their clinical management down the road. The most striking and fruitful of these findings thus far is an enzyme called peptidyl-prolyl cis/trans isomerase, which Lu discovered in the mid-'90s with Tony Hunter, Ph.D., his postdoctoral mentor at the Salk Institute. Thankfully, they dubbed the enzyme Pin1 for Ping, the name Lu goes by. Enzymes like Pin1 control the function of biological processes by literally keeping proteins in "good shape," and Lu recognized that they were on to something promising when his team further found that the Pin1 enzyme acts on a unique subset of proteins and plays a role in a variety of cancers. On the simplest level, the more Pin1 accumulates, the more active a wide range of cancer pathways become. "Dr. Gerberg Wulf, the first oncology fellow in my lab, found that this enzyme is highly expressed in breast cancer," recalls Lu. "And that opened a door. In fact, in the end, we screened almost all the human body in 60 different tumor types, and it turned out that Pin1 is overexpressed in 60 to 70 percent of human cancer."

But just finding a good therapeutic target doesn't mean that it is, in turn, simple to find a viable therapy. The Pin1 enzyme causes only subtle changes to the shape of its target proteins and can make the mechanisms by which this whole pathway works elusive. In fact, despite active pursuit by academic laboratories and pharmaceutical companies, no effective Pin1 inhibitor yet exists. This is where Lu says his wife and longtime collaborator, Xiao Zhen Zhou, M.D., comes in. Also an established BIDMC researcher, Zhou has been instrumental in developing specialized screening techniques to identify chemical compounds that will keep Pin1's enzymatic activity in check. "She takes on the harder, more challenging questions," says Lu. "She is constantly there and knows this research upside down. First, she figures out how the enzyme works, and second, how to develop inhibitors. I think if we can find this inhibitor, we might have major impact on the treatment of disease."

When Lu talks about treating disease, however, he doesn't just mean the promising cancer drugs based on Pin1 that his team has been pursuing for the last five years, including ATRA, the first example of modern targeted cancer therapy (which they recently discovered works even more effectively against the enzyme when combined with arsenic!). Their search for antibodies that specifically detect misshapen proteins when the Pin1 enzyme is abnormally altered under disease conditions has also led to a completely unexpected and tremendously exciting discovery at the opposite end of the age-related disease spectrum—Alzheimer's. Lu remembers when he first raised the possibility of a connection between cancer and Alzheimer's, the scientific community thought the idea was outlandish; researchers in the two fields rarely interacted, and the dearth of crossover publications suggested a link was tenuous at best. But Lu was convinced, and through his lab's work and others, the evidence began to mount. After the atomic bomb was dropped on Hiroshima, cancer rates soared, but the incidence of what disease plummeted? Alzheimer's. If you knock out the Pin1 gene in mice, they don't develop cancer but what do they get? Alzheimer's. Analyses of large clinical databases by Jane A. Driver, M.D., Lu's former trainee and collaborator at Brigham and Women's Hospital, subsequently have shown that if you have cancer, you are protected from Alzheimer's by about 60 percent—and vice versa. "Now finally the National Cancer Institute recognizes, yes, cancer and Alzheimer's are both age-related diseases and are on opposite sides of the same coin," says Lu. "And they cite Pin1 as a major driver of why."

The pressing question for Lu then became how does Pin1 contribute to the development of Alzheimer's and was there anything that could be done about it. Fortunately, with the timely and generous support of progressive funders including The Owens Family Foundation and the Alzheimer's Association, he could veer from his established cancer path to pursue these questions. The answer lies in Pin1's connection to tau, a protein that has been implicated in a range of neurodegenerative disorders including Alzheimer's. Lu's team found that tau has something of a Jekyll and Hyde personality, occurring in two different orientations known as cis and trans. While the trans orientation is healthy and necessary for normal brain functioning, the cis version becomes misshapen and toxic, and can actually destroy brain cells, resulting in the detrimental protein "tangles" characteristic of Alzheimer's. Pin1 acts like tau's parole officer, keeping it from going "bad." 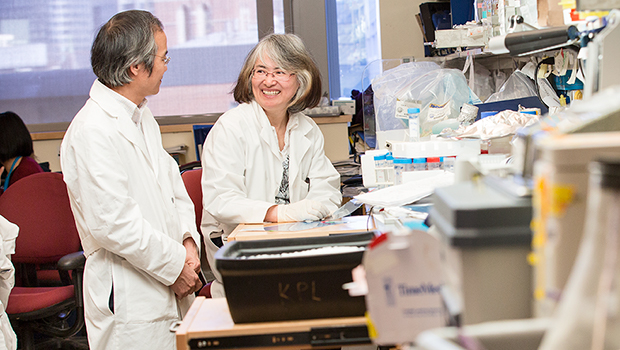 With the help of philanthropy, Lu and Zhou have been in hot pursuit of a new antibody that can detect and ultimately prevent when tau is poised to manifest its dark side and wreak havoc on the brain. "Since this illness takes at least a decade to develop, the major challenge to halting memory loss is to identify the initial period when the brain's tau protein is transformed from 'good guy' to 'bad guy'" says Lu. "Our antibody can specifically detect this disease-causing tau transformation, while leaving healthy tau intact to carry out its important functions."

Because Alzheimer's takes so long to develop, the researchers have turned to the more acute disease model of traumatic brain injury, which also exhibits the hallmark brain tangles. They have demonstrated that tau's sinister form appears soon after brain injury, with its levels dependent on the severity and frequency of the damage, providing the first direct evidence linking this condition with Alzheimer's. And most importantly, they have shown in mouse models that their antibody can prevent the accumulation of toxic cis-tau, stop neurodegeneration, and even restore brain function. Now with a $6 million grant from the National Institutes of Health, their goal is to tailor the antibody so that it can be tested in human patients and to develop cis-tau tests for identifying patients with brain injury and Alzheimer's disease earlier and monitoring their response to antibody treatment.

Lu is quick to point out that although the initial donations to support their work in this area were more modest, they came from the heart and were no less important in that they created a critical foundation on which to build. "This allowed us to generate better data and make a more convincing story to get a bigger grant, as well as to embark on risky new research projects," he notes. "Without that, frankly, we could not do it." With his trademark enthusiasm, Lu can barely contain his excitement on where things might lead, ever ready to pursue what's next on the horizon in this field of constant change. "Basically, if it works, this will open a completely new idea of treating traumatic brain injury or Alzheimer's disease," he says of the new antibody. "Many clinical trials fail. So right now we need to make sure we have the diagnostic and have the target. Before, no one talked about targets for these diseases because we didn't even know what caused the problem—but now we have found something important and we can start in a much better place."