Schilder Family Builds Legacy of Support for Neuroscience at BIDMC 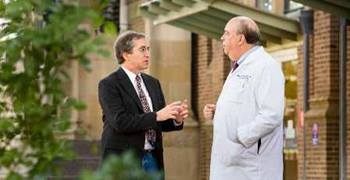 Herbert Schilder, D.D.S., a senior dental surgeon at the former Beth Israel Hospital, used fine motor skills to treat patients every day. So when he experienced trouble using his left hand during dental surgery, he knew immediately that something was wrong. As a 50-year employee of Beth Israel Hospital, he called Chair of the Department of Neurology Clifford Saper, M.D., Ph.D. “My dad wasn’t going to go to see just anybody,” Richard Schilder says about his father. “He wanted to have the best. That’s why he came to Dr. Saper. My parents had a very warm feeling for the hospital and a high degree of trust and faith in the care here.” Nearly a decade after Saper successfully treated Herbert for a stroke, his longtime patient returned to Beth Israel Deaconess Medical Center with a new concern and received a much different diagnosis. With Saper’s help, Herbert battled Parkinson’s disease, a neurodegenerative disease known to affect movement, for six years before he passed away in 2006.

In his memory, Joan Schilder, his wife and a BIDMC overseer emeritus, established a fund in their family’s name to provide support for neuroscience research at BIDMC. When Joan passed away in 2012, she left a $1.2 million bequest through her estate to the endowment and the BIDMC Annual Fund. “The Schilder family has been a strong supporter of our neurology department for more than 20 years,” Saper says. “We are very grateful for the vote of confidence shown in establishing the Schilder Family Neuroscience Endowment Fund.” Inspired by his parents’ giving, Richard recently contributed an additional $125,000 to the endowment and the Annual Fund. “I’m glad they were doing things philanthropically because it set an example for me to follow,” he says.

Herbert Schilder, who served as the chair of the Department of Endodontics at Boston University for 33 years, was known worldwide for pioneering a root canal therapy technique, known as the Schilder technique, to make the procedure safer and more successful. Once diagnosed with Parkinson’s, he stopped seeing patients due to the symptoms, but continued to teach and speak around the world until 2003. “By the time he retired, he had probably taught 15 percent of all the endodontists in the world,” Richard says. Herbert had developed Lewy body dementia, a neurodegenerative disease similar to both Parkinson’s and Alzheimer’s diseases, which causes a progressive decline in mental abilities and is present in many Parkinson’s patients. While there is currently no cure for either disease, physicians can treat worsening symptoms with techniques ranging from medication to surgery. “My hope is that I can help somebody with the tools to find ways to mitigate the difficulties of affected people and their caregiving families,” says Richard, who, along with his mother, witnessed the slow decline of an intelligent and articulate surgeon. “If we can find a means of early detection, perhaps we can find ways to blunt the disease.”

Since the establishment of the Schilder Family Neuroscience Endowment Fund in 2006, Saper has distributed its funds to support novel research initiatives within the Department of Neurology. Researchers are investigating new ways to disrupt the progress of neurodegenerative disorders, like Parkinson’s disease, to improve the lives of patients and their families. “The projects it supports are in the startup phase, seeking to achieve preliminary data that will ‘prime the pump’ for competitive outside support,” Saper says. “This support is crucial for the growth of innovative ideas.”

Richard, who served as a running coach for the Alzheimer’s Association-MA/NH Chapter’s Run to End Alzheimer’s team for the last nine years, understands the role of philanthropy to pursue research. “If you’re in a position to be able to fundraise, it is about paying it forward,” he says. “If you’ve been affected by disease, speak to somebody— your doctor, the chair of a department, a Board member—and find out if there are areas where they have research that needs funding so they can fight some of these diseases. I would love to be able to say someday that I was able to help a family not have to go through that.”