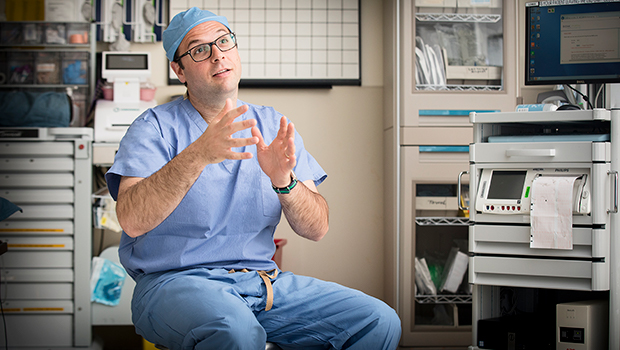 When Annie Koch called Scott Shainker, D.O., M.S., in 2017, she had been on an emotional roller coaster ride for more than three years. After trying to conceive and suffering five miscarriages, she finally succeeded in getting pregnant—only to be told by her physician that the placenta had implanted abnormally, and the pregnancy placed her life in grave danger. Frantic, the Wichita, KS, resident and her husband, Chase Koch, turned to Google to search for a way to safely bring the baby into this world. That's how they found Shainker and BIDMC.

An expert in high-risk pregnancy, Shainker immediately knew it was serious. Annie's ultrasound images indicated placenta accreta, a dangerous condition that develops when the placenta grows deeply into the uterine wall and requires an early delivery via C-section and a hysterectomy. "Delivery with invasive placentation has a 5–7 percent risk of maternal mortality," explains Shainker. "There are no maternal–fetal medicine facilities in Kansas specializing in the care that Annie needed." After that fateful phone call, the couple decided to meet with Shainker in person, and figure out a plan to continue the pregnancy. "Talking to Dr. Shainker on the phone gave us a sense of peace," says Annie. "Our baby had a chance."

Since founding the New England Center for Placental Disorders in 2013, Shainker has built the region's premier integrated program. "Maternal death is higher in the U.S. than in any other developed nation in the world," explains Shainker. "My goal is to reduce the morbidity and mortality rates associated with placental disorders in a significant way." With referrals from across the northeast and patient visits from all over the country, Shainker is widely recognized for providing superior clinical care, but he doesn't stop there. He is also actively engaged in research, education, and advocacy in the U.S. and overseas."

"A significant problem is late diagnosis, after the condition has become advanced," says Shainker. "Research to improve diagnostics is essential." He is leading the charge by establishing the nation's first multicenter placental biospecimen repository focused on placental disorders, which aims to identify a biomarker. This effort enables the collection and analysis of placental, urine, blood, and uterine samples from women with placenta accreta. Shainker is also working to develop the first animal model of the disease, to enable further study, and is exploring innovative artificial intelligence technologies to develop a novel diagnostic algorithm. Six months after the phone call that brought them together, Shainker delivered the couple's daughter at BIDMC. "He did what we were told was impossible—he gave us a healthy girl and mother," says Chase. Adds Annie: "BIDMC will always remain in our hearts because our family was completed there." Grateful for the medical center's life-changing care, the Kochs made an incredible gift of $3 million to support Shainker's research and establish the Annie and Chase Koch Chair in the Department of Obstetrics and Gynecology, of which he will be the first incumbent.

"I admire Dr. Shainker's extraordinary talent and drive," says Hope Ricciotti, M.D., chair of the Department of Obstetrics and Gynecology. "This gift from the Koch family will be transformative in accelerating his pioneering research to revolutionize how invasive placentation research is performed."

Shainker is optimistic about the new endowed chair's implications for his important work. "This phenomenal gift catalyses my research—what would have taken me a decade can be accomplished in two years," says Shainker. "Together we are going to save countless mothers' and babies' lives."