Over the span of 10 years, Alfred Ross agonized as doctors diagnosed two beloved family members with breast cancer. His wife, Karan, was 35 years old when she was treated for the disease, and shortly thereafter, his aunt, Thelma Linsey, received her own diagnosis. He credits BIDMC breast surgeon Mary Jane Houlihan, M.D., for saving them both. More than two decades later, the family is still saying thank you and, in the process, improving care for thousands of patients enduring a similar experience. 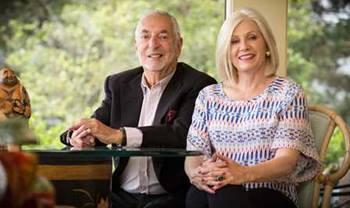 Their experience, though life-changing, was not the first introduction to the hospital for the Linsey and Ross family. Thelma and her late husband, Joe, have generously supported Beth Israel Hospital and BIDMC for more than 50 years, funding programs from oncology to neurology to nursing. After Joe passed away in 1994, Thelma carried on his legacy of philanthropy. When she and Karan were treated by Houlihan and her colleagues at the BreastCare Center, their passion for the hospital deepened. “I felt safe and comfortable with her,” Karan recalls. “She was so confident, and everything about her was so easy. She really took charge of the whole thing. We love her.”

In the most recent gesture of thanks, The Joseph M. and Thelma Linsey Foundation designated $1.8 million to breast cancer care at BIDMC, naming The Joseph M. and Thelma Linsey BreastCare Center. Alfred and Karan complemented this gift with a $750,000 contribution to the BreastCare Center in honor of Houlihan’s care. “It all goes back to Joe,” Alfred says about his uncle and close business partner, who managed greyhound and thoroughbred racing tracks for nearly 40 years. “He was very charitable. Thelma has taken up where he left off, and it has spilled over on Karan and me.” Joe was a longtime board member and philanthropist at the former Beth Israel Hospital, first elected as a trustee in 1946 and earning honorary trustee status in 1967. “I have tried to continue what he started,” Thelma says, “because I, too, believe in the hospital, and I feel that the doctors and nurses have always been there for me when I or anyone in my family has needed them.”

Through their support of the BreastCare Center over the last 20 years, the Linsey and Ross family’s legacy of giving has built a foundation for the personalized and multidisciplinary approach to breast care that patients experience today. “They provided the funding for us to have a dedicated area in the hospital where we were able to do women’s imaging,” Houlihan says. “Women didn’t have to call into a general number and get in a queue. We were one of the first areas that had a scheduler that was completely separate. We would not be where we are today without Thelma’s support.” These most recent gifts will help clinicians further improve this model through an ongoing facility renovation and process improvement.

The BreastCare Center renovation project, which was designed with input from a diverse committee of patients and staff, will enhance coordination between the BreastCare Center’s breast surgery clinic on the fifth floor of the Carl J. Shapiro Clinical Center and the screening and diagnostic imaging service on the fourth floor. “It is going to be wonderful to be able to go into one area where everything is so comprehensive,” Karan says. “It is going to be a lot easier for women. It will be much more relaxing, and I think it is going to make something so terrible much easier.”