When Marilyn and André Danesh, Ph.D., attended BIDMC’s Annual Meeting of the Boards in October 2017, a speech by the Board of Directors Chair Carol F. Anderson struck a profound chord. BIDMC’s longstanding history of inclusion and its service to Boston’s Jewish clinicians and patients, as well as its current-day practice of serving patients of all types and advocating for the underserved, deeply resonated with the Daneshes. The couple was inspired to support the medical center in a way that honored the shared impact of the institution and their families. Their generous $10 million gift will help to advance one of BIDMC’s greatest priorities—the transformation of its physical campus. “We are thoughtful about our legacy and wanted to focus on giving back to local efforts,” says André. “BIDMC’s history demonstrates a commitment to the local community that is reminiscent of our families’ own past, so we are happy to be able to invest in its future.” 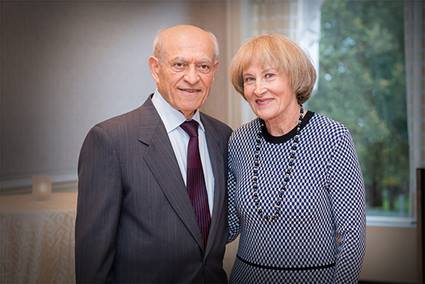 That the Daneshes would develop a long and meaningful tradition of philanthropy was only natural—giving back is an intrinsic part of their heritage. Growing up in Iran before World War II, André observed his father and grandfather fund the creation of a hospital in their home city of Borujerd. André never forgot their generosity, and his childhood experiences remained top of mind as he was considering where to bestow philanthropy of his own. Marilyn, too, growing up in Colorado, was shaped by a household that was rooted in volunteerism and fostered the idea of giving back.

This model of commitment would stay with André as he built his success from the ground up. “I came to America in my youth with only $67 and a Persian carpet but I was able to get an education and become successful,” says André, who against all odds became a chemistry professor and ultimately an investor. “I am very proud of my adopted country, which has given me freedom of religion and the ability to pay it forward.” He and his wife decided they wanted to pass on a respect for their humble beginnings and a deeply rooted tradition of helping others. “It wasn’t important to me to have material wealth,” says Marilyn. “We were more interested in giving back to our area. We’ve always said, ‘What can we do in Boston? How we can help our own community?’”

The couple’s inspiration to give to BIDMC was motivated by the parallels between the institution’s history of inclusion and their own life experiences. Their gift couldn’t have come at a better time to have a community impact as the medical center embarks on the construction of a state-of the-art 10-story inpatient tower on its West Campus, after receiving final state and city approval this past January. A gateway to the Longwood Medical Area, this new building will be designed with input from all BIDMC constituencies and will represent an extraordinary step in making the medical center’s facilities commensurate with the level of its world-class clinicians and staff. These facilities will truly enhance the patient experience, not only focusing on cardiovascular care and a broad range of surgery, but also increasing BIDMC’s percentage of private rooms.

The Danesh family’s gift will name the new building’s main lobby, which will warmly welcome all patients, families, and visitors. “This is going to be one of the most modern, most high-tech, and most sophisticated hospital buildings in the country,” says André. “We are proud to be part of it.”


BIDMC’s history demonstrates a commitment to the local community that is reminiscent of our families’ own past, so we are happy to be able to invest in its future.
André Danesh, Ph.D.