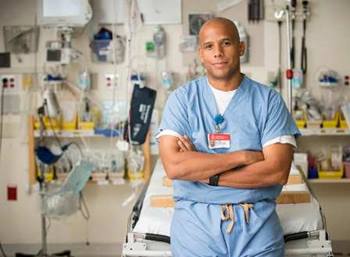 Alden Landry, M.D., M.P.H., knew at a young age that he wanted to pursue a career in health care. He distinctly recalls being inspired when he first saw his grandmother dressed in scrubs with a stethoscope around her neck on her way to work as a vocational nurse. But for a black man in a military family originally from south Texas, the path to becoming an emergency medicine physician at Beth Israel Deaconess Medical Center was not an easy one. “My parents had no clue what it took to get into medical school or what it took to become a doctor,” Landry says. “It was uncharted territory for my family, but I decided this was what I wanted to do.”

While many of his peers with similar goals struggled to find their way into a career in health care, Landry took advantage of extracurricular educational programs in high school, which laid out the path to becoming a health care provider and ultimately set him up to be successful in medical school and beyond. Later, a more personal experience of accompanying his grandfather on a hospital visit in Texas was a reminder that he could use his position to affect change for minorities in the health care system. “No one should have to have a Harvard-trained physician in the family to ensure that the conversation with your doctor goes smoothly,” he says. “Seeing that disconnect firsthand really shaped how I felt about how health professionals understood and cared for patients who weren’t like them.”

Landry’s strong foundation of education and personal experiences set the tone for a career dedicated to identifying health disparities and working with providers on cultural competency training to improve interactions with patients. He also strives to ensure students from disadvantaged backgrounds and other minority students have the opportunity to pursue their dreams of a career in medicine like he did—a path that not only benefits their lives but the lives of their future patients. “There is a huge amount of untapped potential, and there are a lot of students who, if given the right chances and the right opportunities, can accomplish amazing things,” he says. “They have been so overlooked at so many points in their lives that they are never given the right chances to succeed.” 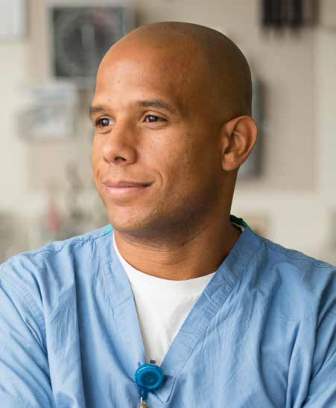 During medical school, Landry got his first taste of the Berenson Emergency Department (ED) at BIDMC through the Visiting Clerkship Program at Harvard Medical School for minority students and later matched with the medical center for residency. He quickly determined that emergency medicine was the perfect fit. “There seemed to be organization amongst the chaos, which was attractive to me,” he recalls. “It seemed like a place where I thought I would thrive.” Not only does Landry care for a wide range of afflictions that come through his door, he also supervises residents during their ED rotations. “I love seeing that evolution from a novice in the emergency department to someone who is skilled at providing great care,” he says. “I love seeing people achieve their potential and that is what inspires me to do what I do.”

As a minority, Landry appreciates that he sees the world through a different lens than many of his colleagues. As a resident in 2006, he recognized the need for a voice from the minority community at the hospital. He joined a multi-departmental team that started a committee to discuss diversity-related issues and implement programming to address health disparities and increase diversity in the workforce. The group helped to establish the Office of Multicultural Affairs, now the Office of Diversity and Inclusion. “You can’t attack any of these issues if you are operating in a silo,” he says. “You have to be able to work with different departments and work with different people. If we work as a team to address these issues, we have a better chance of being successful.” As a result of the new programs, Landry has seen positive changes across the hospital, most notably the increase in use of Interpreter Services by non-English speaking patients. “We can provide better care when we actually speak to patients in their preferred language,” he says. “It helps tailor treatments, and patients have a better understanding of their health in the long run.”

Now a full-time attending physician, Landry is continuing to find ways to improve care for minority patients. In this time of health care reform, he is investigating which populations are using the ED and particularly how minority communities access health care. Despite the mandate for all individuals in Massachusetts to have health insurance and a primary care provider (PCP), Landry and his colleagues found that patients were still coming to the emergency department for non-emergent care like management of blood pressure or diabetes. Many of those patients either did not know their PCPs or could not get an appointment. Others could not miss work during the day and chose the ED for its more flexible hours. “They still felt they had no place to go; they still felt they didn’t have the resources they needed, and they just didn’t have a command of the health infrastructure that we have in Massachusetts,” Landry says.

Landry is now building on this research to develop better methods to address this population. He has already instituted a call-back and text messaging program to remind patients to take medications or to call their PCP to set up a follow-up appointment. The next step is to improve the lines of communication between the ED and the PCPs at BIDMC’s affiliated community health centers to make them aware of the visit and encourage future non-emergent care in the community. “I want to take care of every patient that walks into my emergency department, but I also want to make sure they don’t come back to my emergency department,” he says. “I want to make sure they have the tools and resources to be healthier.”

Helping improve care for minority populations is only the tip of the iceberg. Landry also hopes for a more diverse health care workforce both at BIDMC and around the country. While blacks, Native Americans, and Hispanics make up 31.5 percent of the population, only 8.9 percent are currently practicing physicians and 6 percent are academic physicians. Landry points to research that shows that, when their doctors are of similar racial or ethnic background, patients are more likely to express trust in them, make their appointments and take their prescriptions, and adhere to their care plans. 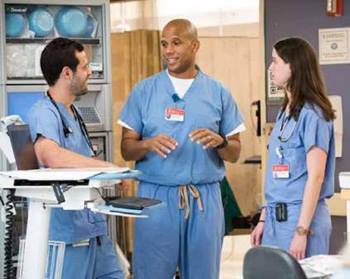 In an effort to help more minorities start careers in medicine, Landry and his friend Kameron Matthews, M.D., J.D., started the national nonprofit group Tour for Diversity in Medicine to encourage, inform, and inspire young people who are interested in health professions. “Nobody in medicine has made it to where they are now without somebody pulling them up or pushing them along,” Landry says. Tour for Diversity in Medicine is a biannual bus tour that brings mentors from across the country to colleges for a full-day conference. Doctors, dentists, and medical students from disadvantaged backgrounds or racial and ethnic minorities share personal stories and tips on how to get into medical school. “It is really hard to become a doctor if you have never seen somebody who looks like you, who talks like you, who has the same experiences and has overcome some of the same obstacles as you to become a physician,” Landry says. “For the students, it is important because they have real life examples of people doing what they want to do.” Four years, 23 states, 34 campuses, and 2,700 students later, Landry is seeing results as students send messages of their successes in applying to medical school.

As residents filter through their rotations under his watch at BIDMC, Landry hopes he is able to similarly impart his experiences while training them to be outstanding, culturally compassionate clinicians not only for their future, but for their future students and patients. “What we do in the hospital is great,” he says. “But we need to make sure we are reaching beyond the walls of the hospital and giving back by supporting our communities, our patients, and those who want to become health care providers.”