A World of Difference 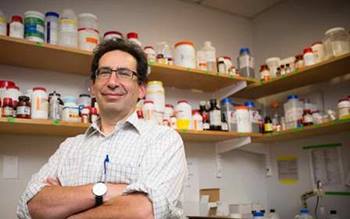 Some diseases make headlines and pull at our heart strings. Others, like kidney disease, fly under the radar. But despite its relative obscurity, kidney disease is a major public health problem affecting primarily underserved populations in the United States and around the world. Without much fanfare, kidney disease causes significant illness and places an enormous burden on the health care system. “It is a big crisis in our country where we have an incredible medical infrastructure,” says Martin Pollak, M.D., chief of nephrology at Beth Israel Deaconess Medical Center, “but worldwide, in less developed countries and less wealthy countries, people don’t have access to transplants and access to dialysis, which compounds the problem. We are optimistic that the work we do here at BIDMC will lead us to new ways to prevent and treat kidney disease to help people everywhere.”

When functioning properly, the kidney is responsible for filtering waste and excess fluid out of the blood and regulating necessary substances like sodium and potassium. When function declines as a result of kidney disease, toxic substances build up in the blood and adversely affect the body’s performance. “Kidney disease puts you at tremendous risk for other problems like heart attacks, heart failure, or heart arrhythmias,” says BIDMC nephrologist David Friedman, M.D. “It is a much bigger issue than I think people are aware.” More than 26 million people in the United States are living with chronic kidney disease and are at risk for additional complications, and nearly half a million people suffer from end-stage kidney disease. African Americans, Latinos, and Native Americans are more likely to be diagnosed with the disease resulting in significant racial and ethnic disparities at every stage. If patients have access to care, current treatments for end-stage disease, such as dialysis or transplant, are costly, are often insufficient, and lead to a diminished quality of life. “Medicare spends more than 30 billion dollars a year taking care of kidney failure patients,” Pollak says. “That is about 6 percent of the Medicare budget.”

While diabetes and high blood pressure are considered the leading causes of kidney disease, researchers at BIDMC have made revolutionary discoveries to unearth genetic factors that explain why certain populations are more susceptible. Their work has already changed the way we approach kidney disease and may one day lead to better treatments and outcomes, and even reduce racial and gender disparities. “The real solution isn’t flashy,” Pollak says. “It is not necessarily a cure. It is preventing people from getting sick in the first place. I am hopeful that ultimately our division can put itself out of business by preventing all kidney disease.”

Through unique cross-disciplinary collaborations in the last 10 years, physician—researchers in BIDMC’s Division of Nephrology have focused on major populations disproportionately affected by kidney disease including pregnant women, African Americans, and Latinos. Nephrologist Ananth Karumanchi, M.D., identified a major protein involved in the development of preeclampsia—a life-threatening pregnancy condition characterized by typical symptoms of kidney disease like dangerously high blood pressure, edema, and protein in the urine; Pollak uncovered the genetic reason why African Americans are highly susceptible to kidney disease; and Friedman is close to untangling the mystery behind a unique kidney disease epidemic ravaging agricultural workers in Central America. But these researchers haven’t rested on their laurels. Now, the team is building on their groundbreaking work to further understand the mechanisms that lead to kidney failure, not only to solve the problem for these specific populations of patients, but to find a solution for kidney disease in general. “It is clear that this is the best kidney disease research group in the country,” Karumanchi says. “We are studying big problems. The work that has come out of this institution has made a fundamental impact on the field of nephrology.” 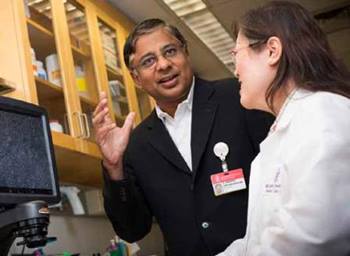 Ten years ago, as a young physician—researcher, Karumanchi put the division on the map when he identified a protein responsible for preeclampsia. In this country alone, one to three mothers die each week from preeclamptic complications; in the developing world, where women might not have access to prenatal care, preeclampsia is the leading cause of maternal death. Combining his clinical background in nephrology with research training in vascular biology, Karumanchi collaborated with colleagues in the Department of Obstetrics and Gynecology and ultimately zeroed in on sFlt1, a naturally occurring protein that impedes the growth of blood vessels. Levels of sFlt1 were elevated in preeclamptic patients and fell after the delivery of the placenta. Karumanchi determined that the placenta was overproducing sFlt1, which spilled into the blood and damaged blood vessels in the kidney, brain, and liver. Further research uncovered that a second protein, soluble endoglin, when combined with sFlt1, escalated preeclampsia to a severe life-threatening state. The finding meant that clinicians can now measure protein levels in the blood not only to distinguish preeclampsia from other diseases with similar symptoms, like diabetes or lupus, but also to determine who is at risk for the disease and its rate of progression.

Despite these critical findings, Karumanchi realizes that both the mother and the child still suffer serious consequences as a result of the disease. Women who have severe preterm preeclampsia are at an increased risk of hypertension and cardiovascular disease, and babies born preterm deal with long-term cardiovascular, metabolic, and chronic kidney disease. “While it has been great to help doctors better risk-stratify these patients, now is the time to really commit ourselves to go for full-out therapies and preventive strategies,” Karumanchi says.

With support from Howard Hughes Medical Institute and the Burroughs Wellcome Fund, his lab is screening natural and FDA-approved compounds already proven safe for pregnant women, with the hope of identifying one that might block production of sFlt1 to delay onset of preeclampsia. Karumanchi is also investigating the damage preeclampsia causes to the mother’s vasculature to potentially define new ways to prevent future stroke or heart attack. “This is a common problem that affects millions of women and babies throughout the world,” Karumanchi says. “I think we are now at a point where we believe it is a fixable problem.”

A few years after Karumanchi’s discovery, Pollak decided to take a closer look at another large population targeted by kidney disease: African Americans. In the United States alone, nearly 40 percent of dialysis patients are black. Through their investigations, Pollak, with Friedman and other members of his team, found that two common variations in a gene called APOL1 are responsible for African Americans’ greatly increased susceptibility to the disease. The high-risk forms of APOL1, which historically were helpful to protect against African sleeping sickness, occur in more than 30 percent of this ethnic group. Two copies of the gene, one copy from each parent, increase the risk of developing kidney disease to almost 10 times that of the general population. This seminal discovery allows clinicians to use genetic testing to predict who may be at high risk for kidney disease. But now Pollak, who was elected to the National Academy of Sciences last year for his achievements in research, wants to know how it works. “Not everyone with the high-risk genotype gets kidney disease,” he says. “One of the things we would like to understand is why some people with this genotype get kidney disease and some people don’t. That might give us clues on how to better treat people.”

With a generous matching grant from the NephCure Foundation, support from The Ellison Foundation, as well as more than $142,000 raised by fellow runners on the BIDMC Boston Marathon Team, Pollak has continued his work to understand the molecular mechanisms behind this gene. Using animal models, the team has identified certain signaling pathways that change the expression of APOL1 in the kidney and lead to an increased propensity for disease. By identifying what triggers APOL1 to cause damage to the kidney, researchers can potentially develop targeted treatments. However, the research is still in its early stages. “I am optimistic that a gene is going to lead us to ways to prevent and treat kidney disease, but I also think we need to do a lot more work to get there,” he says. Simultaneously, the team is also using the latest technology to screen thousands of compounds in search of one that may have an impact on the behavior of the mutant protein. “Support for this work would allow us to accelerate these experiments,” he says. “There is a lot more we can do.” 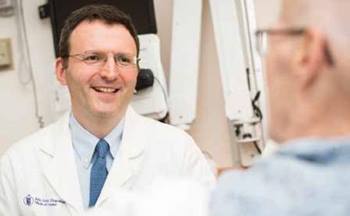 Researchers at BIDMC are also looking for answers beyond our borders. Friedman, in addition to his APOL1 research, is investigating an unexplained kidney disease epidemic in Central America known as Mesoamerican nephropathy. Agricultural plantation workers along the Pacific coast, primarily in El Salvador and Nicaragua, are suffering from high rates of kidney failure not associated with normal risk factors like diabetes or high blood pressure. In one community where Friedman’s team works, where a sugarcane plantation is the major employer, kidney disease is responsible for almost half of the male deaths in the last 10 years. While many assumed the epidemic was due to environmental exposure such as a pesticide or the intense heat, Friedman and a collaborating team at Boston University think the situation may be more complex. They contend that the disease is the result of a unique gene—environment interaction.

Working with a ground team in Nicaragua, Friedman and his colleagues have set up three studies with nearly 1,000 local participants—a family study, a case-control study, and a sibling study—to find possible genetic variants. The goal is to pinpoint a particular gene associated with this form of kidney disease and then look for an environmental factor that interacts with that gene. “In the short term, what is going to help these people is not developing a miracle drug, but instead using the biology of the disease-causing gene to figure out the environmental exposure with the idea that we can change the environment to eliminate the trigger of disease,” Friedman says. The results of this work will not only impact the residents of this region, but also individuals of similar origin in the U.S. “We think what we are going to learn will teach us fundamental things about kidney failure that will have tremendous implications for kidney failure in general, but particularly for the large Hispanic population,” says Friedman. Philanthropic support could not only benefit infrastructure on the ground and improve the ability to collect information and samples from more people, it could also help researchers take advantage of the technology at BIDMC to find answers. “Kidney disease is so underfunded and so neglected relative to the burden it places on public health that even relatively modest infusions of resources can make a huge difference,” Friedman says.

With philanthropic support and continued investigations, BIDMC researchers are poised to change the conversation about kidney disease again. “We know a lot more than we did 100 years ago or even 10 years ago about how the human body works and how the kidney works,” Pollak says. “It took evolution billions of years to figure out how to build a kidney, so it is going to take us a while to understand how it is put together and find ways to fix it.”