Healthcare Heroes Give Thanks, Give Back

The Gift that Keeps on Giving 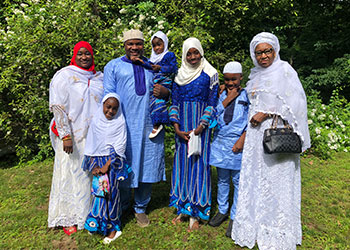 Rukaiya Mohammed and Mailaja Mohammed, NP, are many things. They are essential workers. They are generous supporters of BIDMC. Rukaiya is a grateful patient. But above all, they are Mom and Dad to their four children.

The first time Mailaja saw Rukaiya from across the room, he was too shy to say hello. “There was something special about her. I just knew,” says Mailaja, who took three years to gather up enough courage to ask her for her phone number. The pair, who both emigrated from Ghana to the US as young teenagers, became inseparable and married soon after. Mailaja and Rukaiya spent the next several years pursuing their dream careers in the medical field and settling down in Hudson, New Hampshire.

In 2002, the couple was overjoyed when Rukaiya became pregnant with their first child. One morning, at 19 weeks along, she woke up with intense abdominal pain. Concerned, she went to her obstetrician to learn one of the worst things an expecting parent can hear: she had suffered a miscarriage. “It was one of the saddest days of our lives,” says Rukaiya. “We were devastated, but we were determined to have a family.” And they did. After her tragic first pregnancy, Rukaiya went on to have four children, all at Beth Israel Lahey Health’s Winchester Hospital—but not without struggle. All of her pregnancies have been high-risk with complicated deliveries, especially the birth of her youngest daughter, Safiya.

One day at the end of the second trimester of her pregnancy with Safiya, something intuitively felt wrong. “I thought, ‘maybe I’m tired’,” recalls Rukaiya, a respiratory therapist at Beth Israel Deaconess Hospital–Needham. She soon started experiencing strong, painful contractions and was rushed to Winchester Hospital. That day, in an unexpected turn of events, Safiya was born at 24 weeks old and weighing just 1 pound, 11 ounces. “I still can’t believe how it all happened,” says Rukaiya. As a premature newborn, Safiya experienced health complications from the start; she was transferred to the Klarman Family Neonatal Intensive Care Unit at BIDMC, where she relied on a ventilator to breathe. 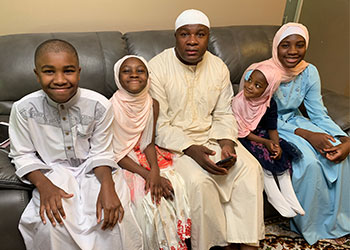 Every day, Rukaiya would drop her three older children off at school, and then drive two hours to Boston to spend the day breastfeeding and holding Safiya. She would then drive home to tuck her other children into bed, only to repeat the routine all over again in the morning—every day, seven days a week, for four months. After spending eight weeks at BIDMC and another eight weeks in the NICU at Winchester Hospital, Safiya was finally sent home. “Everyone at BIDMC was wonderful,” says Rukaiya. “We are so grateful to everyone from the housekeeping staff to the nurses, doctors, and social workers.”

Today, six years later, Safiya is completely healthy. “She is our princess,” says Mailaja, now a nurse practitioner at Southern New Hampshire Health. “She is a happy, feisty girl!” Rukaiya has returned to work and is also earning her bachelor’s degree in nursing. Both are essential workers on the front lines of the ongoing COVID-19 pandemic. In addition to being healthcare heroes, the Mohammeds are loyal, continual supporters of the Newborn Services Fund at BIDMC. “We give so other families can experience the same level of care that we did,” says Mailaja. Adds Rukaiya: “We will always support the team at BIDMC that saved Safiya’s life.”