Investing When and Where It Matters Most 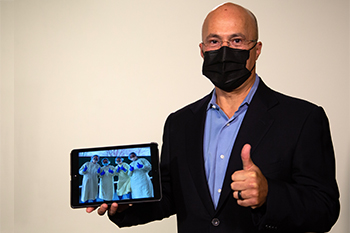 Engineer and entrepreneur Parviz Tayebati, PhD, has an enviable track record of successfully launching tech startups. He has built his career on the critical scientific skill of keen observation, applied to guide decisive action. During the early days of the COVID-19 crisis, those observational skills led him to make his first gift to BIDMC.

When Parviz observed growing concern over widespread personal protective equipment (PPE) shortages, he did not hesitate to act. At the beginning of the pandemic, Parviz directed a gift of $1 million from the Tayebati Family Foundation to BIDMC, specifically for PPE, enabling the hospital to procure critically needed protective gowns for frontline staff. “My sons and I were listening to the news and hearing of the shortages of PPE,” said Parviz, who makes his home in Boston. “I began to hear neighbors and friends talk of their concerns as well. Soon there were requests for the public to bring in any masks they might have. That really brought the crisis home for me.”

The yellow gowns have become a mainstay at BIDMC, unique because of their ability to be washed and re-used over and over. In particular, Parviz’ generosity provided enhanced safety and peace of mind for staff throughout the medical center and at drive-through testing facilities, where a constant change of gowns is required in order to maintain a sterile environment. “This gift was incredibly helpful to BIDMC, and it came at the perfect time,” says BIDMC President Peter Healy. 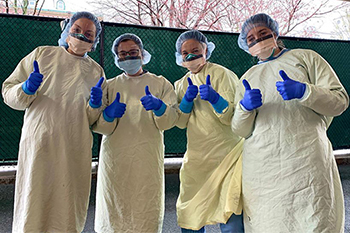 Parviz is a future-oriented inventor and investor, but he is grounded in the present. During a global pandemic, he was eager to do all he could to tackle real challenges—in real time. While Parviz’s immediate goal was to ease the burden on frontline caregivers, he also believed he had a responsibility to act as a role model for his four young sons. “As this unseen enemy hurt friends, neighbors, or family, there was nothing more important than to step up and help,” said Parviz. “I wanted to be sure to show my sons how we could contribute, too.”

As the holder of dozens of issued or pending patents and head of angel investing firm Camros Capital, LLC, Parviz first began his relationship with BIDMC as a patient. “For the 20 years that I have been coming here, I’ve felt this is one of the best hospitals,” says Parviz, who shares his vast finance and entrepreneurial knowledge as a member of BIDMC’s Trustee Advisory Board. “As an engineer-scientist, I appreciate the details; the level of care is just what you would expect. I’ve never considered going anywhere else.”

An informed investor and inventor, a discerning patient and philanthropist, Parviz did not hesitate to take action during a crisis—beginning his family’s philanthropic tradition for the benefit of BIDMC. His generous commitment relieved the desperate shortage of PPE, plus the staff and public anxiety surrounding it. Parviz made a gift when—and where—it mattered most.