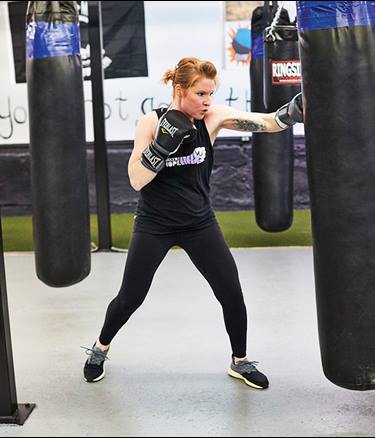 from Boston College when she was diagnosed with stage 2 Hodgkin's lymphoma in 2001. Throughout an arduous series of treatments at BIDMC, the lifelong athlete says she never stopped to take in the entirety of what she was facing. Instead, she felt fortunate to have been diagnosed early and receive extraordinary care.

Restored to health, Kelly soon got back to her athletic pursuits. She was training for a marathon when, one fateful day, she passed a boxing gym. Lucky for her—and so many others—she went in. Kelly fell in love with the sport immediately. "I realized that I had bottled up my emotions about my experience," she recalls. "Boxing was just the medicine I needed."

It was at this very gym that she met her future Haymakers for Hope co-founder Andrew Myerson, a fellow Bostonian. Together they hatched the idea of connecting the camaraderie of boxing to the mission of eradicating cancer. Today their organization hosts charitable boxing tournaments in three cities, helping people of all abilities train and fundraise for four months prior to each event. One hundred percent of proceeds from each participant's fundraising efforts support the cancer institute or program of their choice.

Haymakers for Hope made a generous $20,000 gift to advance the research of David Avigan, M.D., chief of the Division of Hematology and Hematologic Malignancies and co-director of BIDMC's Immunotherapy Institute within the Cancer Center, to investigate a novel vaccine in patients with blood cancers. Supporting BIDMC, and this effort to change the standard of care, is the pinnacle of the organization's mission.

And the organization's impact extends beyond the incredible $11 million it has raised so far. "Boxing saved me just as much as chemo and radiation did," says Kelly. "Introducing this sport to others and seeing them meet a supportive community and become empowered personally—and in the fight against cancer—is remarkably rewarding."

Boxing saved me just as much as chemo and radiation did.
Julie Anne Kelly
Co-founder, Haymakers for Hope