A Bubble of Caring 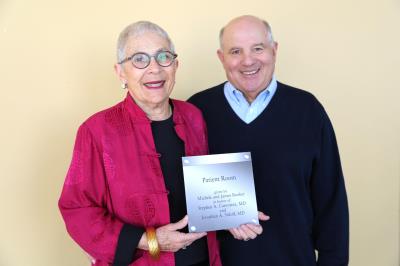 Twenty-three years ago, Beth Israel Deaconess Medical Center donor and volunteer Michele Banker, EdD, began to experience a number of unusual symptoms. She was exceptionally fatigued, her abdomen felt bloated, and the smallest tasks left her feeling defeated. In 1999, following her annual gynecological check-up at BIDMC with Henry Klapholz, MD, the Fidelity Investments risk management associate finally learned the cause, as she was diagnosed with Stage 1 ovarian cancer. In the midst of confusion, sadness, and disbelief, Michele and her husband, Jim, were introduced to a team of BIDMC caregivers led by the late Jonathan Niloff, MD, a surgical oncologist, and medical oncologist Stephen Cannistra, MD. "We were grateful to find ourselves wrapped in a bubble of genuine caring," says Michele.

Today, two decades later, Michele is cancer-free. To express their continued gratitude, the Bankers made a generous gift of $100,000 in honor of Niloff and Cannistra to support the medical center's new West Campus inpatient building. Their wonderful gift will name the Michele S. and James Banker Positive Air Pressure Room in the Carl J. Shapiro Clinical Center, where Michele received the majority of her chemotherapy treatments. "Through all of our experiences at BIDMC, we have been surrounded by compassion and caring," says Jim. "The nursing care is incomparable. Every patient at BIDMC is treated with kindness and dignity."

Initially, Michele and Jim struggled to comprehend her unexpected and frightening diagnosis. "When I first received the news, I went home, put my head under a pillow, and cried. I did everything right — I ate well, I exercised, I didn't smoke — but it didn't matter," Michele remembers. "Only after I learned more about the disease, did I realize that I had been experiencing all the symptoms of ovarian cancer. But twenty years ago, the prevailing 'wisdom' was that there were no identifiable symptoms of the disease. We now know that's wrong."

After Michele underwent surgery with Niloff, Cannistra took over her treatment, overseeing two courses of chemotherapy — one in 1999 and another in 2006, after she had a recurrence. Throughout these taxing experiences, Michele was comforted by the quiet and privacy of the Positive Air Pressure Room. And although she was exhausted, Michele was never alone. In addition to receiving attentive care from physicians, nurses, and volunteers — who served juice, cookies, and TLC — Michele worked with BIDMC social worker Betsy Barnet, LICSW, who has remained a steadfast presence in her life. "The doctors and nurses saved my body, but Betsy saved my soul," says Michele, who was inspired to become a volunteer in BIDMC's Cancer Center to ensure its patients never feel alone. "Once you have cancer, you carry that trauma your whole life — you never know when it might rear its ugly head again. It's our pleasure to give back any way we can."