To most people, $10 doesn’t seem like a lot. But to Erica and Dale Lathrop, receiving a $10 gift card from a member of their care team at Beth Israel Deaconess Medical Center warmed their hearts and changed their outlook—and spurred a wave of generosity that has inspired thousands of people to give to BIDMC’s Klarman Family Neonatal Intensive Care Unit (NICU).

After years of trying to conceive that included two failed in vitro fertilization (IVF) attempts and a heartbreaking miscarriage, Erica and Dale Lathrop started to lose hope in their dream of starting a family. Then out of the blue, Erica was pregnant…with triplets! Sadly, the Lathrops lost one of the triplets early in the pregnancy. Although devastated, Erica and Dale stayed positive and focused on bringing two healthy children into the world. During her 27th-week appointment, Erica was shocked to learn that one of her placentas was no longer thriving, which was affecting her son’s growth. She was referred to see BIDMC’s Barbara O’Brien, M.D., director of prenatal genetics in the Division of Maternal-Fetal Medicine, as soon as possible. Two days later, Dale and Erica walked through BIDMC’s door. She didn’t know it at the time, but Erica wouldn’t be leaving anytime soon, and they were about to embark on a journey that would change their lives forever.

Erica vividly remembers her very first visit with O’Brien. “I was incredibly anxious and apprehensive,” says Erica. “But she helped put me at ease. We were treated like we were her only patients that day.” The environment was comforting, however Erica’s test results were not; she would not be able to go home that evening. That’s how she started her three-week journey in BIDMC’s Antepartum Unit.

During her stay at BIDMC, Erica remained strong—despite feeling terrified. She befriended every BIDMC staff and faculty member on her floor, attending rounds and social work meetings whenever she could. She decorated her room with photographs of her loved ones, flowers, and artwork. Since the Lathrops celebrated both Christmas and the New Year at BIDMC, she also decorated for the holidays. And she completed six exhausting hours of non-stress testing each day without complaint. “I had no control over the situation,” says Erica. “But the one thing I did have control over was my attitude.” Above all, Erica was determined to make it to 30 weeks so her babies could have the very best chance at a healthy start. 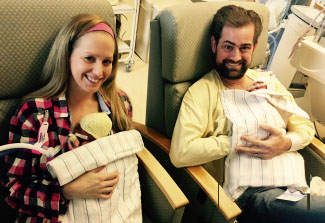 When Erica was 31 weeks pregnant, O’Brien came to visit after a daily growth test (performed to ensure that babies were growing at an appropriate rate). O’Brien calmly told Erica and Dale she would be delivering their babies that day, as tears streamed down their faces. About an hour later, she performed a smooth delivery to welcome Hunter and Teagan. At nine weeks premature, the twins were brought to BIDMC’s NICU, where Erica and Dale visited daily. “It was frightening to see them surrounded by doctors, nurses, and respiratory therapists,” says Erica. “But we knew they were in the very best hands.” As days went by the Lathrops became extremely comfortable with the NICU doctors, nurses, and staff that they started to consider family. One day, Dale and Erica received approval to finally bring Hunter home. Their joy was short-lived, however, as Hunter’s health diminished later that day and he could no longer be discharged. They were devastated. When Margaret Day, family program manager in the NICU handed them a $10 gift card to get something to eat, it brought them a moment of much-needed comfort. “It was a small gesture but it meant the world,” recalls Dale. “That’s when we decided to give back to the BIDMC Newborn Services Fund.” In the end, Teagan spent 66 days in the NICU and Hunter was released after 97 days. Counting Erica’s time in the Antepartum Unit, the Lathrops spent 120 days total at the medical center.

Once the family of four settled at home and the twins’ health began to improve, Dale and Erica decided to act on their idea of wanting to give back to the place that meant so much to them for so long. As General Manager of Planet Subaru in Hanover Massachusetts, Dale implemented a program called “Pledge for Preemies.” For every new car sold in June of 2017, Planet Subaru and the Lathrops made a $30 total donation. With this fundraiser, they also had a month-long “Stuff a Subaru,” event where both employees and customers could help fill a Subaru in Planet’s showroom with clothing, coffee, gift cards and more, all to be donated to the NICU. At the end of the month, the couple proudly made a $5,000 gift to the NICU. Hunter and Teagan’s primary BIDMC nurse, Julie Barrington, R.N., arrived at the dealership to accept the gift on behalf of the medical center. That was only the beginning. For Hunter and Teagan’s first birthday party in January of 2017, the couple asked that in lieu of bringing a birthday card, to instead leave a donation of any denomination to benefit this fund. Then they proudly matched every single contribution.

Today, together with Planet Subaru, the Lathrops launched yet again another fundraiser to benefit the families of the BIDMC’s NICU. Through Subaru’s Share the Love program, an event that takes places at Subaru retailers nationally, $250 from the sale of each new car sold from November 15 until January 2, 2019, will be donated to a charity of the customer’s choice, where the BIDMC NICU is one of two listed local charities. Dale and Erica are thankful to have this platform to raise awareness of all the wonderful ways that the BIDMC NICU gave back to them, in hopes to make a difference to that one family that might need the simple comfort of a donated bite to eat, a cup of coffee, free parking that day, or something more.

“We have so much to be grateful for,” says Erica. “BIDMC’s staff helped us mentally, emotionally, and physically, to become parents.” Adds Dale: “In so many ways, BIDMC gave us life.”