Sam Torney and Kelli Pertler, RN, will run a victory lap in September 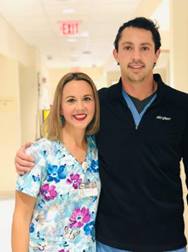 Sam Torney and Kelli Pertler, RN, share a passion for running and a determined attitude when it comes to confronting life's challenges. When they signed up for the 2020 Boston Marathon as members of Team BIDMC, the pair joined forces to train for the famously difficult 26.2 mile race and to raise funds to support the Cancer Center at Beth Israel Deaconess Medical Center. But Torney and Pertler's ability to work together to conquer adversity — and their enduring friendship — goes far beyond their mutual love of running.

Long before joining Team BIDMC, Torney and Pertler were mentally prepared for their arduous training. They first met in early 2019 at BIDMC. At the time, Torney was 29 and working in medical sales. A lifelong athlete, he was training for an Ironman competition when he began to experience leg pain. He thought it was nothing serious — a slipped disk, perhaps. But when an MRI showed that a large tumor was pushing on his spinal cord, he discovered, much to his dismay, that he had stage 4 non-Hodgkin's lymphoma.

"It was unreal, my life was turned upside down," says Torney, who had more than thirty tumors throughout his body. "I went from training for the Ironman to starting cancer treatments." Under the care of BIDMC oncologist Jon Arnason, MD, he immediately began receiving high-dose chemotherapy. As his primary care nurse, Pertler spent dozens of hours overseeing Torney's rigorous treatments and providing much-needed companionship and support. "Kelli was unbelievable," says Torney. "She attended every single treatment. She went above and beyond with absolutely everything — she is a wonderful person."

For Pertler, who became an oncology nurse after her father succumbed to bone cancer in 2011, working with Torney was enormously rewarding. "When my Dad was sick, the nurses made my family feel loved at a vulnerable time. That's what I aim to do," says Pertler. "Throughout this whole ordeal, Sam was never afraid. He was determined to get better." And his conviction paid off. A mere five months after beginning treatments, Torney was in complete remission. "I am incredibly fortunate and am deeply grateful to BIDMC," says Torney. "Every day, I feel better and better." 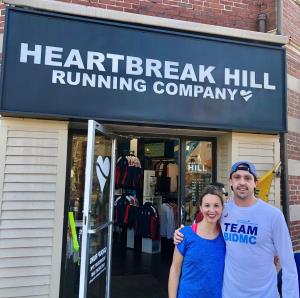 Over the course of his care at BIDMC, as Torney and Pertler's friendship grew, they discovered their shared love for running. "The Boston Marathon had always been on my to-do list," says Torney. "Last year, two days before my fifth round of chemotherapy, I was sitting at the finish line waiting for several of my friends to cross." It was only natural that a few months later, when his recovery coincided with the opportunity to join Team BIDMC, the two decided to run the marathon together in support of the Cancer Center. "This year I am excited to be there, not as a spectator, but as a runner," he says.

"I know my Dad would be proud of me," says Pertler. "Sam and I are trying to reach the ultimate finish line: a cure for cancer." Adds Torney: "I consider myself extremely blessed and am honored to be able to give back to the hospital that saved my life."