Watching the runners every year has been so inspiring, but I never thought I could do it.
Maisie Ostrye
Team BIDMC 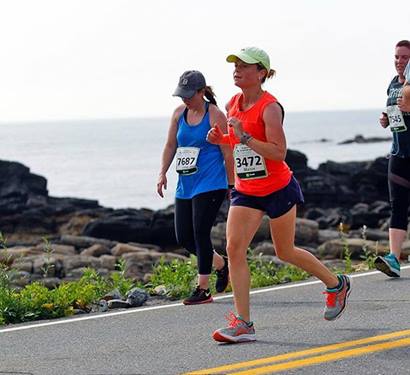 Tara O’Meara was known to her loved ones for her warmth and selfless spirit, always taking care to ensure her friends and family understood just how much she loved them. When she was diagnosed with esophageal cancer in 2015, it came as a shock to everyone she knew, leaving them all with a feeling of uncertainty.

Fortunately, her community hospital, Beth Israel Deaconess Hospital–Milton, referred her to the Cancer Center at Beth Israel Deaconess Medical Center, where the physicians and nurses immediately jumped into action. O’Meara was courageous every step of the way as she endured three rounds of treatment. Her caregivers became like another family, unfailingly dedicated to providing comfort and expertise. “The entire BIDMC team truly gave me a sense of calm and reassurance, trying as many things as they could,” says O’Meara’s daughter, Maisie Ostrye. “They answered all of our questions thoughtfully, and we never felt rushed.”

Sadly, despite the steadfast efforts of her doctors, nurses, staff, and volunteers—and her family’s unending support—O’Meara passed away in December 2017. Ostrye, who had a close relationship with her mother, was devastated. Reading the inspirational stories of Team BIDMC’s Boston Marathon runners, she would ultimately uncover a meaningful way to find solace. When considering running in the 2019 Marathon, she saw it as the perfect opportunity to pay tribute to her mother’s strength throughout her battle with cancer and give back to BIDMC’s Cancer Center.

Though it is her first marathon, Ostrye is determined to succeed, equipped with a running coach and a positive attitude. “Watching the runners every year has been so inspiring, but I never thought I could do it,” she says. “It called to me this year, though, when I saw BIDMC was looking for runners. I wanted to not only honor my mother’s memory but also to give back to the medical center that helped her so much.”

Ostrye knows firsthand how special the Boston area, and BIDMC specifically, is in terms of providing access to leading-edge care. She has been reaching out to her network of family, friends, and coworkers, and has even hosted a fundraiser in order to meet her $10,000 fundraising goal to support the medical center’s efforts.

“I didn’t want to run for anyone else—it had to be BIDMC,” she says, “I’m still in contact with some of my mother’s caregivers. I won’t ever forget the level of empathy they had for their patients. It was palpable.” Reflecting her mother’s courage and resilient spirit, Ostrye will be making her friends at BIDMC proud on Marathon Monday, embodying the same excellence that inspired her loyalty to the institution.