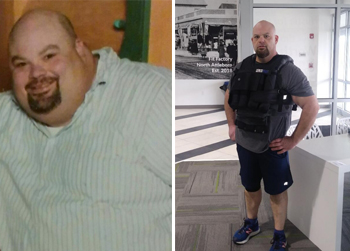 At 40 years old, Brad Correa knew that it was not too late for him to turn his life around. “I made up my mind to have weight loss surgery five years ago and to do whatever it took to become healthy and fit,” said Brad.

Ultimately, Brad accomplished exactly what he set his mind to do and gained an entirely new healthy lease on life by losing 200 pounds.

Brad has maintained his weight loss due to his unwavering mindset to prioritize his health needs on a daily basis, a willingness to set achievable realistic goals and an attitude of gratitude.

“From the get-go, my mind was critically focused on being healthy and fit,” Brad said. “I kept all my appointments at the bariatric clinic and followed the advice from Dr. Jones and the bariatric team, for which I am immeasurably grateful.”

Brad continually reassesses his goals. By setting realistic fitness goals, Brad’s fitness routine has reached a whole new level. Currently, Brad goes to the gym five days a week and works with a personal trainer who alternates Brad’s workouts so that his body is constantly being challenged.

“To be brutally honest, there are days when I have to drag myself to the gym,” Brad said. “Sometimes, I shorten my workout, but I don’t feel guilty, because life happens. I still congratulate myself for making it to the gym and for any efforts I put toward fitness that day.”

For the past five years, Brad has walked five miles a day on the treadmill, five times a week. According to Brad, though, one of the most challenging walks he has taken over the past few years is the walk from his head to his heart.

“Eliminating emotional weight required as much diligence as removing physical weight,” said Brad. “Conquering feelings of self-worthlessness and guilt, and “shame eating” caused from being overweight since childhood were difficult emotional hurdles for me to overcome because they were deeply engrained. I had to invest countless hours of self-reflection, introspection and seek professional counseling in order to rid old feelings of blame, shame and guilt associated with being overweight.”

Therapy has helped Brad identify his emotional sensitive spots, so that he won’t impulsively eat to comfort himself. He also avoids negative people and stressful situations. “I like associating with like-minded people at the gym who are uplifting and provide support to one another,” said Brad.

Previously, Brad had a history of roller coaster dieting. Brad believes that this type of eating caused an overwhelming emotional fear that he would regain the weight he lost.

For that reason, on his fifth weight loss surgery anniversary, Brad went to his gym and wore two vests. Each weighed 100 pounds and acted as a reminder of the extra weight he once carried. It took him 23 minutes and 22 seconds to walk a mile on the treadmill carrying the additional 200 pounds.

“I knew I had to walk this walk on my fifth anniversary of weight loss surgery to remind myself what it previously felt like to carry an extra two hundred pounds,” said Brad.

When he finished the mile walk, Brad sat down on the treadmill and cried, releasing years of tears for the person who was imprisoned by so much weight for so many years.

“The exercise helped release my past,” Brad said. “Now I feel free to be the person I am and was always meant to be. NOW I can finally embrace my new life without any fears.”