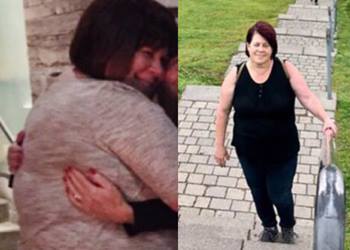 There is a TV commercial for hair replacement in which a man says, “I’m not only the president of this company, but I’m a client, too.”

“I am not only a circulating bariatric nurse, but I had bariatric surgery, too,” she said.

“One would think that by observing weight loss surgery in the operating room, it would be easy to make the decision to have weight loss surgery,” Anne explains. “But for me, it wasn’t. I was able to avoid making a decision because, quite frankly, I was in denial.”

Anne says that she did not take any pictures of herself prior to surgery, knowing that she would have to confront herself if she saw a photo.

“It was easier not to face the truth,” she notes.

But carrying an extra 80 pounds was affecting Anne’s life in a number of ways. Deciding what to wear was “always an exercise in time and frustration.” She hardly exercised, and a fall that injured her knees gave Anne an additional excuse not to.

“My family, especially my sister, would get so mad at me because she felt I had given up on myself,” said Anne. “Traveling was also intimidating, especially when flying—I had to squeeze my body into the seatbelt, because I was embarrassed to ask for an extension belt.”

Anne recalls the moment she decided to get screened for weight loss surgery. She was at work, as usual, in the bariatric operating room, when a co-worker started bemoaning her own lack of weight loss despite going to the gym.

“I said, ‘Enough is enough. It’s time for us to look into bariatric surgery for ourselves, we deserve to be healthy,’” Anne said.

After making a list of pros and cons about having surgery, Anne scheduled an appointment for a consultation at BIDMC’s Weight Loss Surgery Center.

Before her surgery the following March, Anne had several appointments with members of the multidisciplinary staff in the Weight Loss Surgery Center, including Dr. Jones and bariatrician Edward Hatchigian, MD. She also underwent required labs and tests to assure that she was a safe candidate for weight loss surgery.

“Even though I told them that I had tried every diet plan possible, I still needed to lose 10 pounds prior to surgery,” said Anne. “But I really came to terms with my decision to have the surgery, and worked through feelings like I was NOT a failure for not being able to lose or maintain weight loss.”

Today, 80 pounds lighter, Anne’s life has changed for the better. Traveling is no longer intimidating and exercising is a regular activity. She has also noticed that a previous irregular heartbeat has become regular and within normal limits again.

Since Anne and Dr. Jones are colleagues in the Department of Surgery, Anne seized every opportunity to enthusiastically share her excitement about her eye-opening experiences after surgery.

“Poor Dr. Jones - I think he was a little nervous coming onto the floor where I worked, afraid I was going to attack him with my latest revelations like my lowered heart rate” said Anne.

“Anne’s results after the sleeve gastrectomy were fantastic,” said Dr. Jones. “I was thrilled to share Anne’s joy about her improved health and lifestyle.”

“I found myself comparing my weight loss with others, and I had to stop that,” Anne explains. “I may not have a model’s body, but I am absolutely happier. And,” she adds with a chuckle, “when some inconsiderate driver parks too close—I can squeeze into my car much more easily!”

Anne also wondered how having the surgery would affect her enjoyment of dining out. “The key to dining out, I’ve found, is to plan ahead,” Anne shares. “I still eat out, but I either order an appetizer or share a meal with others.”

Planning ahead for a restaurant meal is just part of Anne’s continued vigilance to maintain a healthy weight and lifestyle. She has gained a new appreciation for the bravery and strength her patients possess.

“It takes a lot to make that decision and go through all the steps to have surgery, exposing yourself physically and emotionally,” Anne said. “Weight loss surgery requires a serious commitment to lifestyle changes. As an OR nurse and bariatric patient, I am deeply sensitive to each patient’s journey and it is truly an honor to be by their side.”