Michael's Story: A Second Chance at Life After Losing 123 Pounds 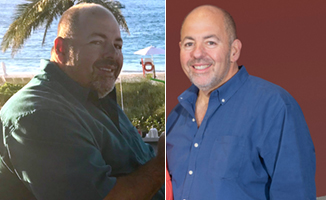 At the young age of 51, Michael Colizzi was headed towards liver failure and contemplated adding his name to his family’s tombstone. Michael owns a family monument business that helps people commemorate their loved ones who have passed away.

Due to his job, Michael knows all too well the experience of losing a beloved family member to illness, and was determined that he would do all he could to prevent his family from experiencing that loss.

“Once diagnosed with stage III non-alcoholic fatty liver disease, I figured I better get everything in order because my life span was closer to closing than I thought,” says Michael.

“My mother died of liver disease, my liver function tests were profoundly abnormal, a FibroScan® revealed damaging liver problems and I was not a candidate for a liver transplant due to a high body mass index,” Michael adds.

Michael says that not only was his liver a problem, but that he was on a pathway for additional health issues due to severe hypertension, shortness of breath upon exertion, heart palpitations, diabetes, sleep apnea, and joint and mobility issues.

He recounts taking several medications for hypertension along with medications for diabetes, as well as obtaining a CPAP machine for sleep apnea and living on ibuprofen for joint pain.

Michael was advised by his physician that losing weight was imperative.

“I fully realized that weighing 350 pounds was taxing my body … even bending over to tie my shoes, the ground seemed so far away,” says Michael. “Of course I tried to lose weight but I would lose 20 pounds only to regain 25 pounds.”

After numerous, unsuccessful attempts to lose weight and given the seriousness of his medical issues, Michael’s physician suggested weight loss surgery.

“I acted quickly to schedule an appointment with Dr. Daniel Jones, Chief of Minimally Invasive Surgery and Bariatric Surgery at Beth Israel Deaconess Medical Center, because if my liver disease progressed, I would not have been a candidate for weight loss surgery,” says Michael.

Michael says having the sleeve gastrectomy was the best thing he ever did for himself.

“I now know what it feels like to feel good,” says Michael.

Michael’s sleep apnea has resolved. “It feels remarkable to sleep through the night,” Michael says.

He is currently taking only one medication for high blood pressure. His liver function test results are within normal limits and the FibroScan has shown dramatic improvements to his liver.

Not only has Michael’s experience improved his quality of health since surgery, but his daily activities and social life have significantly changed.

“I am of Italian descent and my entire life focused around an abundance of food and preparing food for the family. I even built a new house with an expansive kitchen prior to weight loss surgery to have ample room for my family to cook, eat and gather together,” says Michael.

However with new, healthier lifestyle changes, Michael wanted to step out of the kitchen and step into life with a focus on other family activities. Michael has since added a home gym where his family exercises together.

“My joints don’t hurt me anymore, I am able to exercise and run five miles each day enjoying my new jogging shoes. I have not taken any ibuprofen since my weight loss,” Michael says.

Holidays are also different now for the entire family.

“My wife and I used to prepare for Thanksgiving and Christmas dinner for 70 guests—if you saw our dinner table you might have thought it was the Last Supper,” chuckles Michael.

Thanksgiving will be different this year, celebrated by a family trip to Orlando, Florida. “The focus will be on other things this Thanksgiving rather than sitting around the table,” says Michael.

Michael recalls the days when he had to shop at specialty stores that were very costly because he needed a size 58 suit jacket and 46 pants. Since surgery, he rid his closet of those larger sizes and reduced his pant size to 36 and suit jacket to size 46. “Being able to buy clothes off the rack is so unusual and wonderful,” says Michael.

Both he and his wife love to travel, however, Michael says traveling now is a lot easier, with no more limitations or need to use extension belts on airlines.

On a recent Caribbean trip, Michael took his shirt off for the first time while on the beach. “My wife laughed out loud when I declined to put it back on because she was worried I would get sunburned.”

Michael’s outlook on his health has drastically changed since surgery.

“I never ever realized how wonderful I would feel after losing weight, as I felt so terrible for so many years,” said Michael. “I would not trade my new life for anything.”

Michael plans on maintaining his weight loss by sticking to his daily food and exercise plan and with support from his family, his dietitian Danelle, and by keeping his scheduled appointments with Dr. Jones.

Nowadays, instead of writing his eulogy, Michael says, “My goal is to live a long and healthy life enjoying my wife, family and grandchildren with no restrictions, or worrying about dying from associated medical issue related to morbid obesity.”

“Weight loss surgery saved my life,” he adds. "My wife has a new husband, everyone in my home has benefited by living healthier lifestyles.”