More Within Introduction to Celiac Disease

What is Celiac Disease?

There are four main categories of celiac disease.1,2

Classical or typical celiac disease: It is characterized primarily by gastrointestinal features such as diarrhea, weight loss and associated abdominal pain or nutritional problems due to malabsorption. A biopsy of the small intestine will show villous atrophy and improvement of this atrophy will usually be seen on the gluten-free diet. Symptoms should also improve on a gluten-free diet. 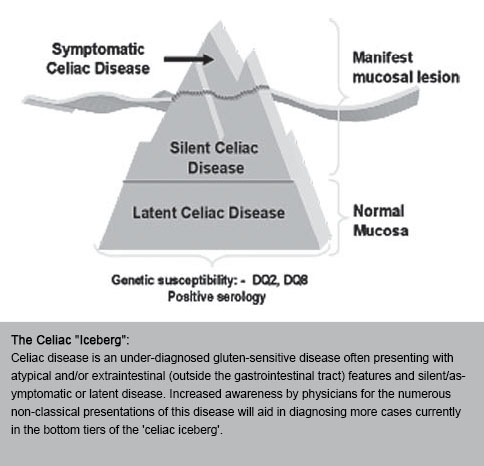 How does celiac disease develop?

Three conditions are necessary for celiac disease to develop:

Environmental or physiological factors include surgery, pregnancy, childbirth, viral infections, or severe emotional stress.4 Researchers are investigating other factors that may influence the symptoms of celiac disease including cow's milk formulas, breastfeeding, age at gluten introduction, quantity of gluten, and quality of cereals.5,6 Researchers are trying to investigate this fascinating area of the disease.

Atypical symptoms of celiac disease that USUALLY respond to treatment with the gluten-free diet include:7

Atypical symptoms that SOMETIMES respond to the gluten-free diet:7

Conditions associated with celiac disease that ARE NOT expected to respond to the gluten-free diet include:7

What is non-celiac gluten sensitivity (NCGS)?

Non-celiac gluten sensitivity (NCGS), also called "gluten intolerance" by the general public, is generally thought of as a functional disease. It affects how your body functions, but no physical reason for the symptoms can be detected. In NCGS the intestine is normal. It is believed to be related to how the nerves control digestion, although subtle changes in the immune system may also play a role. We don't know yet if NCGS is a type of functional disorder or whether some people with NCGS actually have a very mild immune reaction to gluten. NCGS can mimic the symptoms of celiac disease so it can be very confusing to diagnose.7

NCGS is a diagnosis of exclusion. This means that your doctor will only give you a diagnosis of NCGS if both celiac disease and a gluten or wheat allergy have been ruled out. By definition, people with NCGS feel better on a reduced gluten-containing diet. However, whether this is a life-long condition and to what degree gluten should be avoided is currently under investigation. Until such data is available, people with NCGS should do whatever they feel offers them the best quality of life overall.

NCGS is currently a very popular research topic. Researchers are trying to understand if it is linked to Irritable Bowel Syndrome or if it is a separate disorder. They are also investigating how it develops, who it affects, and how it may progress. You will be reading much more about NCGS in the future.

If I suspect celiac disease, should I start a gluten-free diet before I see the gastroenterologist?

Does it matter how quickly I get an official diagnosis?