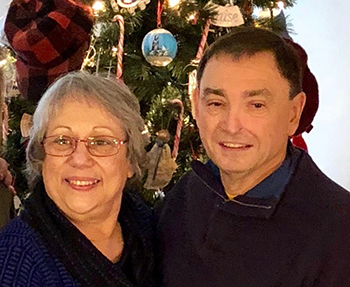 As her husband’s caregiver, Mary Antonetti has been on an emotional roller coaster over the past 10 years. Shortly after retiring, George Antonetti was diagnosed with advanced heart failure, a life-threatening condition prevents the heart from pumping enough blood. BIDMC's Advanced Heart Failure team managed his condition for years with medications and lifestyle adjustments. But fatigue and breathlessness severely hindered his quality of life—until George and Mary received promising news.

In 2016, George became a candidate for a heart transplant. To keep George's heart functioning until a donor heart became available, he would receive a ventricular assist device (VAD), a mechanical pump that is surgically implanted to improve blood flow through the heart while awaiting the transplant. Mary soon learned about the critically important role she would play.

"One of the key criteria in determining if a patient with advanced heart failure qualifies to receive a VAD is whether he or she has a home caregiver who is willing and able to provide near constant care and support," explains Suzie Quinlan, RN, VAD Coordinator in BIDMC's Advanced Heart Failure program. This includes monitoring for infection, changing dressings, managing numerous medications, assisting with activities of daily living, and providing transportation. It also includes maintenance and care of the device itself, for example, making certain that batteries are always charged.

"VAD home caregivers are really super heroes," says Quinlan. "November is Family Caregiver Month and we want everyone to know what an amazing job caregivers like Mary do to ensure that patients with advanced heart failure can survive and succeed with these lifesaving devices."

On May 5, 2016, BIDMC cardiac surgeon David Liu, MD, operated on George, surgically implanting the VAD. One month later, George was discharged from BIDMC.

"The first six months at home after George received his VAD were often difficult," says Mary. "There was an infection, I was trying to stay on top of so many hospital and doctor appointments, I was feeling overwhelmed. I've always been a very faithful person, but this experience really challenged me."

But, she adds, throughout it all, George never complained and she knew that she had the support of her adult children and their spouses, as well as the VAD specialists and the Advanced Heart Failure team.

Mary had also seen a quote from Nelson Mandela that gave her inspiration: Courage is not the absence of fear, but the triumph over it. For Mary, triumph over fear came the day she drove to Boston from her home in Walpole to pick up George following one of his many hospitalizations.

"My son, my daughter, and my neighbors had been pitching in and driving me to Boston for months," Mary remembers. "They were all so supportive but one day I said to myself, 'Mary, it's time.'" She laughs as she recalls saying Hail Marys as she maneuvered across the busy Jamaicaway on her way to BIDMC And with that achievement under her belt, Mary says she gained even more courage.

"I just kept doing all I could to keep George healthy and out of the hospital while he waited for his new heart," she says. Not only was she successful in taking care of George's medical needs, she made sure that the family continued to enjoy life. After getting clearance from Will Grandin, MD, and the Advanced Heart Failure medical team, Mary arranged for George and the family to spend Mary's birthday playing Laser Tag at a local sports facility. She encouraged George to continue to golf. She even took him to the local zoo, where George rode a camel.

On August 18, 2019, his grandson Luke's birthday, George received his new heart and the VAD was removed. Today, George continues to grow stronger.

"The VAD gave us three extra years and I believe the experience has brought our family closer," says Mary. "We're looking forward to more time together and more adventures. What an incredible strong man I married. He is my hero."