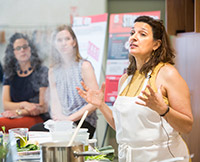 The CardioVascular Institute at Beth Israel Deaconess Medical Center, the American Heart Association and the American Stroke Association recently observed national Stroke Month with a free heart-healthy cooking demonstration at Boston Public Market. The presentation by renowned chef and cookbook author Diane Kochilas focused on Mediterranean food. The recipes she prepared are below.

Not only is Mediterranean food delicious, but it has plenty of health benefits as well. Fresh, seasonal vegetables are rich in vitamins, minerals and dietary fiber. Olive oil — a staple in the Greek diet — contains monounsaturated fatty acids that can help lower total cholesterol and improve blood clotting. Feta cheese, traditionally made with goat’s or sheep’s milk, is a good source of protein and calcium and has less calories and fat than most other types of cheese.

Kochilas learned about healthy living the healthy Greek way on the island of Ikaria, where her family's roots go deep. She and her family still live and run a cooking school there in summer. Try the recipes below and imagine yourself dining outdoors in a slight breeze from the Aegean Sea.

All recipes from the kitchen of Chef Diane Kochilas 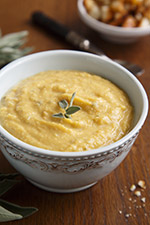 Heat one-third cup olive oil in a large pot. Add the onion and cook until soft, 10 - 12 minutes. Add the yellow split peas and toss to coat with the oil. Stir for 1 to 2 minutes. Add enough water to cover split peas by two inches. Cover and bring to a boil over medium heat. Reduce heat, uncover, and cook over very low heat, stirring occasionally to keep from sticking, for 1½ to 2 hours, until the split peas are completely disintegrated. During the course of cooking, add water. When the split peas have reached the consistency of loose mashed potatoes, remove from heat and add salt and pepper.

Using an immersion blender or food processor, whip the fava until smooth and silky, adding the remaining olive oil and vinegar or lemon juice, to taste. Season if necessary with more salt.

Serve warm with various garnishes. The classic: 1 red onion, halved and sliced or coarsely chopped, with a drizzling of olive oil and lemon juice. 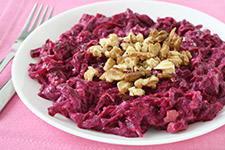 Rub the beats with olive oil, salt, pepper and a pinch of allspice. Place each beet inside a piece of aluminum foil. Wrap the first three. Take the garlic cloves and add one to each of the remaining beets. Wrap in the aluminum foil. Roast for about one hour, or until you can pierce the beets easily with a fork. Remove and cool.

Peel the beets. Press out the softened garlic from each of the three cloves and set aside.

Whisk together the yogurt, softened garlic, and vinegar. Toss with the beets and walnuts. Serve. 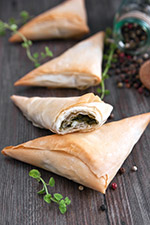 Preheat oven to 350⁰F. Spread a piece of parchment paper over the surface of a shallow baking tray or pan.

In a large skillet over medium-high heat, add two tablespoons of olive oil and sauté the spinach until wilted and most of its liquid has cooked off. Remove and set aside to cool. Note: If the sautéed spinach is still very wet, drain it in a colander.

Wipe the skillet clean and heat another 2 tablespoons olive oil over medium flame. Sauté the scallions, leek, and onions until soft.

Remove the phyllo from the box, unwrap and unroll it and place it vertically in front of you. Cover with a cloth and place a damp cloth on top if the kitchen is hot. Otherwise, work fast, as follows: Cut the stack of filo into three rows, vertically. Place half the narrow stacks on top of each other and keep covered with a kitchen towel and a damp cloth on top of the towel, while you work with the rest.

Take one strip and brush with olive oil. Place a second strip on top and brush that, too, with olive oil. Place a heaping teaspoon of the spinach filling on the bottom right corner of the filo strip and fold it up to form a right angle. Continue folding from corner to alternating side, the way you would a flag, forming right angles with each new fold. Place seam-side down on the sheet pan. Continue until filling and filo are used up. Brush the tops with olive oil and sprinkle with a little cold water. Bake the triangles for about 10 – 12 minutes, until golden. Remove and serve, either hot, warm, or at room temperature. Note: You may freeze the assembled, unbaked pies for up to a week and bake them off directly from the freezer to a preheated oven.