At the Heart of Ikaria

Does a Greek Island Harbor the Secret to Longevity?

At first glance, Ikaria may seem like the typical Greek island with its rocky, mountainous landscape, pebble coves and pristine beaches washed by the blue-green Aegean Sea. But the similarity ends there because the people of Ikaria can lay claim to being one of five populations in the world where people live much longer than average.

One in three Ikarians lives into his or her 90s, reaching that decade at two and a half times the rate of Americans. Furthermore, Ikarians live eight to 10 years longer before fatal bouts with cardiovascular disease or cancer, and experience less depression and only 25 percent the rate of dementia.

What is their secret? As with many situations that defy the general rule, there’s no single differentiator, but rather a combination of several factors. And these factors are as powerful as they are simple. 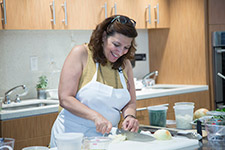 Renowned chef and cookbook author Diane Kochilas (right) is a native New Yorker whose family roots are in Ikaria. Recently, she made a celebrity chef appearance at a Boston Public Market demonstration co-sponsored by the Cardiovascular Institute at Beth Israel Deaconess Medical Center and the American Heart Association. This host of a popular Greek television cooking show says that simple, seasonal, unrefined foods are at the heart of the Greek and Mediterranean diets.

“Many Ikarians have year-round gardens and also forage for wild foods,” Kochilas says. “Savory herbs, nutritionally packed edible weeds — it’s a much healthier, genuine relationship with food versus the unlimited choice of over-processed foods typically found in the Western diet.”

Dr. John Markis is a CardioVascular Institute cardiologist who annually visits Crete, another Greek island where his father and all his ancestors were born.

Crete, like Ikaria, is “an agrarian society and they still take pride in the foods that they themselves produce,” he says. “The Mediterranean diet is not one thing in particular. It’s more about eating naturally and eating simply and being satisfied with that. It’s about living off the land in many ways.”

Markis (right) pointed out that genetics probably has something to do with the longevity of the inhabitants of these islands. He also suspects the impact of very high consumption of olive oil in Greece and other Mediterranean countries, where the diet has similar characteristics though with countless local variations.

Markis, who recently obtained dual citizenship of Greece and his native United States, describes a mouth-watering Mediterranean-style meal during his most recent visit that included pork from a family-raised pig, beans from the garden, hand-gathered land snails, egg lemon soup, fresh bread, squid cooked in its own ink and stuffed eggplant with feta.

The Blue Zones: Where Longevity Lives On

Interest in the varied incidence of heart disease in different parts of the world began with research published in 1966 by the late Ancel Keys, a noted physiologist who invented the K-Ration, championed the Mediterranean diet and died at age 100. In a seven-nation study , he identified Crete as the place with the least heart disease on earth.

In 2004, Dr. Gianni Pes of the University of Sassari in Italy and Dr. Michel Poulain, a Belgian demographer, published a demographic study that documented the extreme longevity of inhabitants on yet another Mediterranean island, Sardinia. Inspired by this work, Dan Buettner, an American writer, joined forces with the National Geographic Society and the U.S. National Institute of Aging. This team identified four additional “Blue Zones,” where people live measurably longer than average lives, including Ikaria. Over a period of years, they made many trips and collected data on the five Blue Zone locations.

The Blue Zones are:

When Buettner and his team compared lifestyle characteristics in these places, they determined that the Blue Zones share the following traits:

In his book The Blue Zones: Lessons for Living Longer from the People Who've Lived the Longest, which Buettner published in 2008, he expands on the shared characteristics to include: engagement in religion or spirituality, close family ties, a sense of life purpose, stress reduction practices, moderate alcohol intake — especially wine — and a low-calorie diet.

All the Ingredients for a Healthier Heart

Unlike the typical Western diet that contains refined grains, sugar and deep-fried foods, the Mediterranean diet centers around fresh, unrefined foods. It consists of fewer meats and carbohydrates than the average American diet, and has more plant-based foods and monounsaturated (good) fat. According to the U.S. National Library of Medicine, following a Mediterranean diet can help stabilize blood sugar and lower cholesterol and triglycerides, which in turn can lower the risk of heart disease and other health issues.

It’s a diet that research suggests can reduce the risk of heart attack and stroke in people who already have heart disease. A four-year study of more than 22,000 people living in Greece determined that the closer they followed a traditional Greek diet, the less likely they were to succumb to heart disease or cancer.

Markis advises his patients to eliminate as much as possible “the four white foods” — flour, sugar, rice and potatoes, and to adopt a diet that emphasizes proteins, especially plant-based sources such as beans and lentils.

“It’s not that they shouldn’t have the four white foods ever again,” Markis says. “But they need to be cut back. Otherwise, it will be difficult to control weight and blood sugar levels.”

Go With the Flow — But Not Alone

While the American Heart Association acknowledges that the incidence of heart disease and the overall death rate is lower in Mediterranean countries than in the United States, it doesn’t attribute this to diet alone. As confirmed by the research of Pes and Poulain, lifestyle factors such as greater physical activity and extended social support systems seem to play a part as well.

Indeed, Ikarians live a laidback lifestyle with little need for modern contraptions — and that includes clocks. People wake up naturally, tend to their gardens and eat a late lunch followed by a nap. In the evenings, they gather with neighbors and often socialize late into the night.

The connection between strong social ties and longevity has been confirmed in dozens of studies that show people who have positive relationships with family, friends and community. Scientists have found that strong social connections help relieve high levels of stress that can negatively affect coronary arteries, insulin regulation, gut function and the immune system.

Ikaria’s geography lends itself to natural physical activity. From garden chores to walking along the hilly terrain to meeting up with neighbors, physical activity is organically built into the daily routine. Instead of slumping on the couch every evening in front of a television screen or a laptop, Ikarians gather to share food, wine, music, traditional dancing and conversation.

Wait — Did You Say Wine?

Though it may seem counterintuitive to mention “alcohol” and “healthy heart” in the same sentence, research supports what many centenarians have claimed over the years — that a daily glass or two of wine can be a beneficial elixir.

According to the American Heart Association, moderate amounts of alcohol raise levels of high-density lipoprotein (HDL, or “good” cholesterol) that are associated with greater protection against heart disease. Moderate alcohol consumption has also been associated with health benefits ranging from improved insulin sensitivity to factors that influence blood clotting. Additionally in the case of wine, flavonoids and other antioxidant substances found in grape skin can help protect the heart and vessels from free radical damage.

Lessons from the Old World

Wish to live the healthier life of an Ikarian, but not ready to dust off your passport? Fortunately, there are some simple changes you can make right now that can have a positive impact on your wellness. One place to start is by reading Kochilas’ book, Ikaria: Lessons on Food, Life and Longevity from the Greek Island Where People Forget to Die , which contains information about the lifestyle and recipes.

Try to incorporate fresh, seasonal fruits and vegetables into your diet, and opt for whole grains, which are high in cholesterol-lowering fiber, according the American Heart Association. Choose fish and poultry over red meat whenever possible, and use monounsaturated or polyunsaturated fats such as olive oil when cooking and preparing foods.

Cultivate supportive relationships and try trading FaceTime for face time. According to the American Psychological Association, even though people are more connected to one another than ever before via social networking sites and text messaging, they also more isolated and lonely once they step away from the computer or smartphone.

Be mindful of making physical activity a part of your daily routine. Go for a walk in the fresh air and take the stairs instead of the elevator. And when life inevitably gets busy, smell the roses, visit a friend, dance into the night and sip an occasional glass of wine.