Taking One Step at a Time After a Heart Attack 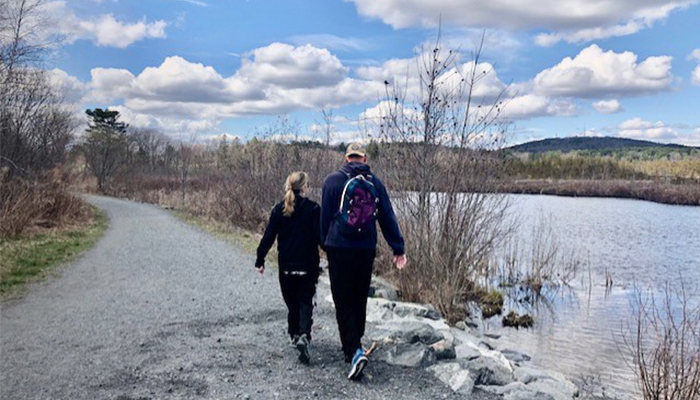 Kim Langway (right) in April 2022, walking around Ponkapoag Pond with his partner Mary.

Most runners have heard the adage that there's no such thing as bad weather, just wrong gear. An idea embraced by marathoners in New England training for Boston; it's also common knowledge to anyone with a year-round running routine, including Kim Langway.

"I ran every day, whether it was 100 degrees outside or 20 below zero," said the resident of Randolph, MA, who has been an avid runner for nearly 50 years. Langway started running in high school and completed the Boston Marathon in his early 20s. He continued running regularly into his 60s, usually between 6-8 miles a day around his home and in the Blue Hills Reservation.

On a Saturday in October 2021, he walked 4 miles around Ponkapoag Pond with Mary, his life partner of 39 years, and then he ran six miles home. He felt great.

Sunday was a different story.

After mowing the lawn, Langway sat down on the front steps and could not get up. Mary called 911, and the next thing he remembers is waking up in the emergency room. Langway was having a heart attack and was in severe distress. He was rushed by ambulance from Beth Israel Deaconess Hospital Milton to Beth Israel Deaconess Medical Center in Boston.

Life in the Balance

Duane Pinto, MD, MPH, Section Chief of Interventional Cardiology, performed an urgent cardiac catheterization to reopen one of the main arteries to the heart and restore blood flow, but during the procedure, Langway flatlined. His heart completely stopped beating, and CPR was not bringing him back. Dr. Pinto quickly inserted a small temporary heart pump that maintains blood flow to critical organs. He also connected Langway to a life support machine called ECMO (extracorporeal membrane oxygenation) to keep him alive.

"Everything was touch and go for three days," said Mary. It was a scary time, but ECMO and the pump – a left ventricular assist device – helped his heart rest and recover.

E. Wilson Grandin, MD, an Advanced Heart Failure and Transplant Cardiologist and Medical Director of the ECMO Program at BIDMC, trains others to use the life-saving ECMO technology only available at hospitals with the highest level of intensive care. It's a complex therapy that involves coordinating a team of physicians, advanced practitioners, nurses, perfusionists, and respiratory therapists to care for patients with critical illnesses. A member of the Advanced Heart Failure Program, Grandin is also part of a group of physicians researching how to improve patient outcomes through the combined use of ECMO and different heart pumps.

"ECMO is a life-saving technology that can restore blood flow to a patient’s body when the heart has become extremely weak or has gone into cardiac arrest. However, ECMO puts increased stress on the heart, so sometimes we use other circulatory support devices in tandem with ECMO to help the patient’s heart recover," said Grandin.

Several days after Langway came off life support and the left ventricular heart pump was removed, everyone was surprised at how well he was doing. But it was also a surprise to his extended family and friends that someone seemingly healthy could have a heart attack in the first place. Grandin acknowledged how counterintuitive cases like Langway’s can be. “Kim was doing all the right things: exercising, eating well, and managing his blood pressure. But he also has a family history which predisposes him to heart disease,” said Grandin.

Langway's mother passed away at age 43 from chronic obstructive pulmonary disease, and two of his aunts and an uncle have had heart problems. So he's aware that heart disease runs in his family, but he had no symptoms and never thought he would require such a serious intervention.

"It woke me up a bit," said Langway recently. He's trying to get back to doing the things he loves: driving trucks, playing hockey, and spending time outdoors. These days his routine is walking instead of running, but he has a new sense of gratitude for just putting one foot in front of the next. "I was so lucky.”

When cardiac arrest occurs outside of a hospital, the survival rate is less than 12 percent. However, studies have reported the survival rate can increase up to 50% among patients who received ECMO. The specialized equipment which requires intense staffing can have a big payoff. When Langway thanked the team for his second chance, the room got quiet. “It’s just what we do,” said Dr. Pinto.