Navigating the Road Less Traveled with a Lift from Heart Device 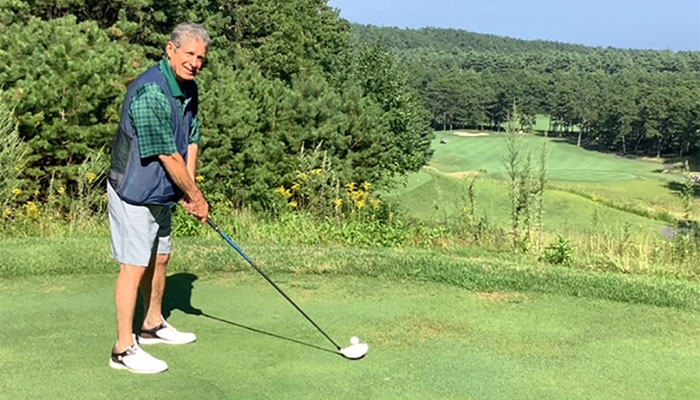 If you asked Hamlin Pakradooni last spring what life would be like a year later, there might have been a long pause. The 73-year-old was at a crossroads, and the uncertainty he felt was not caused by the pandemic.

At the time, his heart was pumping only half of the blood needed to maintain his body. He was experiencing the effects of advanced heart failure and was in and out of the hospital. One road would have led to a heart transplant, but it was not an option due to his age. His cardiologist in Plymouth, Massachusetts, Michael McLaughlin, MD, suggested a different route which brought him to Roy Sriwattanakomen, MD, in the Advanced Heart Failure Clinic at Beth Israel Deaconess Hospital-Plymouth.

“When I first met Mr. Pakradooni, he was struggling with advanced heart failure. He became short of breath with minimal activity, which was a big change from his previously active lifestyle. He had also lost a lot of his muscle mass due to his illness and was becoming increasingly frail,” commented Dr. Sriwattanakomen.

Mr. Pakradooni had heard of pacemakers but didn’t know there was a device that would help the heart pump blood: a ventricular assist device (VAD). A VAD is a mechanical pump that is surgically implanted and eases the heart’s workload.

“Dr. Roy provided me with a lot of information and encouragement,” shared Mr. Pakradooni. “He’s a great guy.”

In addition to explaining what to expect, he outlined the importance of having a home support person to help monitor for infection, manage medications, and assist with daily life activities. With his wife Barbara on board, they agreed this was the best road to take.

The VAD team at Beth Israel Deaconess Medical Center was the next stop, where a group of doctors, surgeons, nurses, and others who are part of the Advanced Heart Failure Program met with the family. “I was really impressed in Boston. Every aspect of care is covered, including pharmacy and nutrition,” said Mr. Pakradooni. His surgeon David Liu, MD, inserted the VAD in March, and after a few weeks in the hospital, he was back home in Plymouth.

Within a few months, he was surprised to be feeling good enough to hit the golf green. His VAD requires batteries which he wears in a special vest. He said, “I thought it would restrict my swing, but it doesn’t. It hasn’t even affected my score!” VAD Program Nurse Practitioner Annie Malinn, RN, shared, “He’s been terrific to work with and has such a positive attitude. I’m not surprised he is back out playing golf.”

In Plymouth, the Pakradoonis were surprised to find two other people who had the device in their neighborhood. They had heard that only about 10,000 VADs are implanted annually but knew that the device is becoming a more common therapy for heart failure. The amount of time that the pump will provide support to the heart varies, but some patients can thrive with a VAD for up to 10 years. “To me, that means I’ve got at least 10-15 more years!” Mr. Pakradooni exclaimed recently. “I’m an optimist.”

Looking back to last spring, Mr. Pakradooni mused, “There was a while there when I questioned if I would be breathing a year later.” He would not have guessed that he would be walking the Wildwood Boardwalk on the Jersey Coast and building sandcastles with his granddaughters on vacation this summer. “I feel much better and have more energy than before,” he said.

The journey has not been without ups and downs, but his wife Barbara, who helps with her husband’s daily care, focuses on the positives: “They said we would have lost him within a year. The VAD gave us our life back.” The couple is glad to have taken the road less traveled, and they are determined to make the most of this new destination.

To schedule a consultation with the Advanced Heart Failure Program, email us or call 617-632-9207.