From Song to Speech 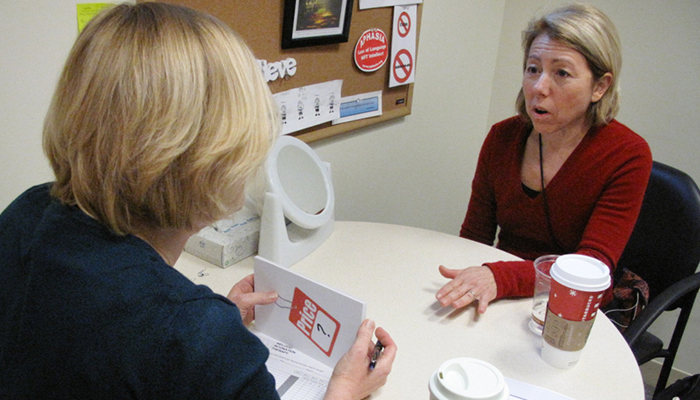 The children and youth that Laurel Fontaine volunteers with at her North Attleboro church adore her. And who wouldn’t? She’s got a lot to say, she has a beautiful smile and a great sense of humor, and she’s passionate about giving back. 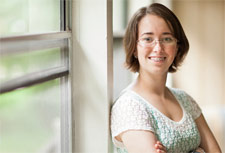 It’s been a long road for Laurel (right). If you didn’t know her history, you’d never guess that eight years ago, when she was just 11 years old, Laurel suffered a massive stroke.

Within minutes that Memorial Day weekend, a medical helicopter landed in the park where Laurel and her twin sister had been playing and airlifted Laurel to the hospital. (Laurel was not treated at Beth Israel Deaconess Medical Center.) While she spent the next 10 days in a coma, doctors gave her parents a very grim scenario: If she was to survive, Laurel would probably never be able to walk, talk, or care for herself again. One of her doctors said it was the biggest stroke he'd ever seen.

Because the stroke had destroyed most of the left side of Laurel's brain, including the area that controls speech production, talking was one of her biggest challenges. After a year of conventional speech therapy, Laurel could produce only one or two words at a time.

About a year after the stroke, a relative saw a news story about the melodic intonation therapy (MIT) research being conducted at Beth Israel Deaconess Medical Center (BIDMC). Laurel’s mother immediately contacted the researchers, asked them to evaluate her daughter, and persuaded them to apply for the special permission that would allow her then-12-year-old to undergo melodic intonation therapy at BIDMC. The researchers would also monitor her speech and language progress, and her brain’s response to treatment throughout the therapy.

“The goal of melodic intonation therapy is not to turn the person into a singer, but to help them speak again using intonation as a bridge,” says Dr. Gottfried Schlaug, Director of the Neuroimaging and Stroke Recovery laboratories at BIDMC.

In fact, a stroke survivor with aphasia — the loss of ability to express verbal and/or written language caused by injury to the brain — doesn’t need to have any special musical background, enjoy singing or even be able to carry a tune to participate in this therapy. Once the basic process is learned, using the intonation (singing), continuous voicing, and rhythmic tapping unique to MIT can help make producing simple phrases like “I am hungry” become easier.

This method has the potential to provide a means for the recovery of speech production that is different from traditional therapies because it is capable of engaging the healthy portions on either side of the brain to support function lost due to stroke or other brain injury.

A year before Laurel underwent treatment at BIDMC, 72-year-old California resident Don Huntington successfully participated in a study conducted by Dr. Schlaug and his team testing the effectiveness of melodic intonation therapy.

Like 20 to 30 percent of the 795,000 Americans who have strokes each year, he was diagnosed with aphasia and could no longer speak, read, or write.

“He was extremely frustrated. He knew what he wanted to say, but he was unable to say it or write it,” recalls Lynn Huntington, Don’s wife. “He could only say a few words, but they were unclear, and he couldn’t put them together. His once-clear handwriting looked like chicken scratch.”

“Patients with a stroke on the left side of their brain can engage the undamaged right side of the brain for communication by using the unique components of melodic intonation therapy,” says Dr. Schlaug.

The researchers have seen on magnetic resonance imaging (MRI) studies how this particular form of therapy can engage and activate these brain regions as patients slowly regain the ability produce words.

“It’s like teaching the brain a new trick and then continuously practicing this new trick,” he adds. “The stroke takes brain tissue away. With melodic intonation therapy, we try to re-route the brain’s pathways to help the patients to speak again.”

While most patients’ speaking abilities improve, the amount of improvement depends on the individual.

“Generally, the more motivated an individual is, and the more often he or she applies the skills and strategies they’ve learned from our intervention, the greater the improvement in speech production we see,” says Dr. Schlaug.

Laurel participated in the therapy every day for four months. Her fluency improved and she began rebuilding her vocabulary. Now, she doesn't even need to sing the words out loud, but does so quickly in her head if she is having a hard time producing the words to express her thoughts.

"On her first day, she started with about eight words,” David Fontaine says of his daughter's progress. “Now she has about 8,000."

Patience and frequent practice over a long period of time are key factors in recovery.

“It’s like trying to teach someone to play the piano — it’s a long and intensive program,” Dr. Schlaug adds. “Those who stick with it and practice daily see lasting improvement.”

Now back in California, practice remains a challenge for Don Huntington. But he keeps at it, knowing that practice is what will help him maintain the skills he gained during treatment.

“The program is amazing. It gave me my husband back. It’s a gift that they gave to us,” Mrs. Huntington says.

Laurel is offering a gift of her own. She has created a business card that identifies her as an "inspired stroke survivor," and she hopes to participate in a program that will allow her to talk to and encourage others who have had strokes as they begin their own journeys on the long road to recovery.

"I want to give others hope,” she says, “so they understand with hard work and a positive attitude, things can get better."

As an outgrowth of their early work with melodic intonation therapy, Dr. Schlaug and his team are currently conducting a randomized controlled trial funded by the National Institutes of Health (NIH) to better understand the ways in which intensive treatments such as MIT can affect recovery of speech in patients with post-stroke aphasia. They have also piloted the use of MIT combined with non-invasive brain stimulation to enhance its effect.

In a clinical setting apart from the research, they also offer this combined treatment on a fee-for-service basis to patients who do not wish to be considered for enrollment in the clinical trial, those who want to come for a shorter period of time, as well as those who want to either refresh or continue to build on the skills that they have learned while participating in the trial.

The researchers have also used their experience with MIT in aphasic patients to adapt the treatment and create an intervention called Auditory-Motor Mapping Training (AMMT) for minimally verbal children with autism — those who have either lost or failed to develop spoken language, one of the most heartbreaking forms of the disorder. The team is currently conducting an NIH-funded study comparing this adapted version of MIT with another novel speech intervention developed in their lab to see if either form of the treatment could help such children with autism regain or develop the ability to produce speech sounds. That research is being conducted at BIDMC in collaboration with researchers at Boston University’s Autism Center of Excellence.