Ushers in the year of the monkey 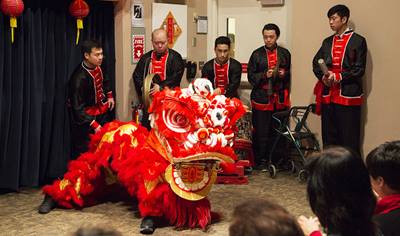 According to legend, the Asian Lunar New Year began with a fight against the mythical beast, Nien. To prevent Nien from attacking villagers, people put food outside their doors and hung red lanterns on their homes to frighten him away. Today, the holiday is customarily marked by visiting with family and friends, the exchange of small gifts in red envelopes, firecracker displays and wearing red clothing.

“This event, as well as many others we hold throughout the year, celebrates our diverse BIDMC family,” said Kevin Tabb, MD, President and CEO of BIDMC, as he welcomed guests. “Today we honor not only our workforce, but our patient population as well.” 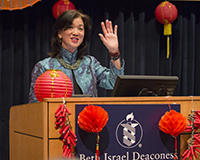 Tabb introduced Master of Ceremonies, Liz Cheng, General Manager for Television at WGBH and a member of BIDMC’s Board of Overseers.

“I think it’s very auspicious that I should be here today, because not only was I born in the Year of the Monkey, but my son was as well,” she said.

The first performance of the day was the Lion Dance by the Boston Chinese Freemasons Athletic Club. The lion danced around the auditorium, presented oranges to special guests and showered audience members with lucky candies. 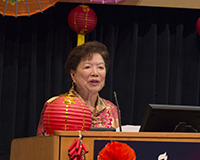 “I’m glad to have this chance to talk about the New Year,” she said. “It’s like Thanksgiving - everyone gets together and has a very good time!” 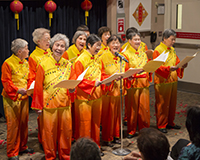 RTH Phoenix Toward the Sun, a singing and dancing group, also performed next. The group is made up of Roxbury Tenants of Harvard Community Center senior center residents, with the oldest member at 85 years old. All smiles, the group of 12 ladies passionately sang two songs a capella style. Three members also performed a traditional fan dance, gracefully moving through the music and showcasing their flexibility and strength.

Qingen Ke, MD, a BIDMC Research Fellow in Cardiology, closed the celebration with a performance of “Deep Night” on a jinghu, a Chinese bowed string instrument. This solo was originally composed for the King of the West Chu’s concubine, Yu, who accompanied the music with a sword dance.

To honor Lunar New Year, BIDMC staff were invited to donate infant and toiletry items to benefit the Emergency Shelter at Asian Task Force Against Domestic Violence (ATASK). This organization primarily serves Asian families and individuals who suffer from or are at risk of domestic violence. BIDMC and South Cove Community Health Center often refer individuals and families to ATASK.