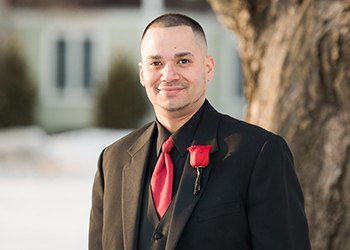 The thought of developing a neurodegenerative disease is not on most young people’s radar but that is precisely what happened to Edwin Rivera who diagnosed with Parkinson’s disease at just 37 years of age after he developed muscular stiffness on his left side and a slight tremor. He was initially treated with a class of medications called dopamine agonists but then transitioned to the gold-standard combination of Carbidopa/Levodopa as his disease progressed. Though he is responsive to these medications, the response is erratic, resulting in variations in his motor performance throughout the day. Consequently, Mr. Rivera’s neurologist of four years, Dr. David K. Simon, recommended Deep Brain Stimulation (DBS) to help manage these bothersome fluctuations.

DBS involves the surgical implantation of a device called a neurostimulator — similar to a heart pacemaker — which delivers electrical impulses to targeted areas deep within the brain that control movement. After surgery, the stimulator is activated and the electrical signals adjusted, as needed, to control the patient’s symptoms. These adjustments are made by a programmer that communicates via radio waves with the implanted device.

When asked about his initial response to the idea of DBS treatment, Mr. Rivera shared, “I think my response was, ‘No way. I’ll stick to the meds.’ At the time, they were working for me and the thought of surgery never crossed my mind.”

However, Mr. Rivera says he started to struggle at work, and his Parkinson’s symptoms started to interfere with his day-to-day living. This prompted Mr. Rivera and his wife, Sherry, to say “yes” to DBS treatment.

The first step in the process is determining who is a good candidate for the procedure. Dr. Simon shared that use of DBS treatment in the past was reserved for individuals whose disease was very advanced. However, research now shows significant benefit in patients who receive the therapy earlier in their disease course, particularly in younger patients like Mr. Rivera.

After additional testing, Mr. Rivera’s care team determined he would be a good candidate for the procedure. The next step was having a multidisciplinary team, including Dr. Simon, Neurosurgeon Dr. Ron Alterman, a neuropsychologist, social worker, nurses, coordinators, and fellows and others coordinating all aspects of the procedure and post-procedure care.

“They were amazing during and after the procedure,” Mr. Rivera recalls. “Both Drs. Alterman and Simon were very informative. They both answered all our questions and made this whole process very smooth.”

From a Smooth Practice to a Quick Recovery 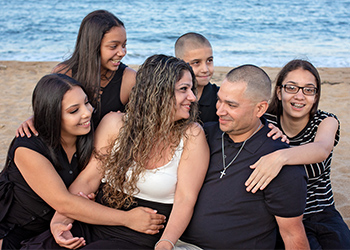 Not only was Beth Israel Deaconess Medical Center (BIDMC) the first hospital in New England to perform DBS surgery, but on June 3, 2021, the team at BIDMC was the first in New England to implant a new type of DBS device, one they felt best fit Mr. Rivera’s needs.

The DBS operation is actually performed in two stages. During the first stage, the neurosurgeon implants two stimulating leads (one in each hemisphere of the brain) in a specific area of the brain, the area determined by the symptoms the surgery is meant to manage. These regions are so small and so specific that mistargeting by more than 1-2 mm can mean the difference between success and failure. There are a number of acceptable ways to perform this surgery, each with advantages and disadvantages, but in general a combination of high-resolution MRI, a high tec-targeting system, and in some cases detailed electrical mapping of the region are required. Patients are typically observed in the hospital overnight after this first procedure to make sure there are no complications.

One week later the patient returns to the hospital for the second procedure during which the electrodes are connected to the neurostimulator via extension cables that are tunneled under the skin from the head to the chest. After the device is fully connected, the neurostimulator is implanted under the skin of the chest wall. This second stage is an outpatient procedure, that is, the patient returns home the very same day.

The patient sees the surgeon 10-14 days after the second-stage procedure to make sure all of the incisions are healing and to remove the surgical staples. Four to five weeks later, after the brain has had a chance to heal, the neurostimulator is activated and the best settings to control the patient’s symptoms are determined.

“Mr. Rivera had great results, and we quickly found settings that work for him,” said Dr. Simon.

“Recovery for me was pretty quick. I was back at work after three weeks but could have gone back after two,” said Mr. Rivera, who works full time as a lead shipper. “I’m feeling pretty good, and I sometimes forget to take my medications because I no longer get that ‘wearing off’ feeling. I’ve had a couple of ‘tuning’ sessions with my doctor, so adjustments are still in progress. Overall, I’m feeling much better.”

“I Should Have Considered It Sooner”

Though the procedure may not be appropriate for every patient, Dr. Simon said his role is to help his patients make the best decision for them and their family — and Mr. Rivera agrees DBS treatment was the right one for him.

“I would say, for me, I should have considered DBS sooner,” Mr. Rivera said. “I spent a lot of time worrying about my life, work, family, bills, etc. This procedure, for the time being, has relieved some of those worries for me.”

He also credits the BIDMC team for an exceptional experience.

“Dr. Simon has been great from the start, which is why I travel to Boston for my appointments rather than see a neurologist closer to home. Dr. Alterman — you see right away why they say he’s the best. They are both very intelligent, informative and make you feel like you are getting the best care.”

Learn more about DBS treatment and connect with a physician about your care.