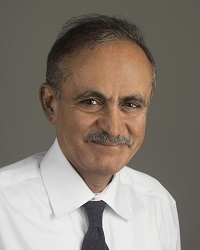 Boston, Mass. – Matcheri Keshavan, MD, psychiatrist and Academic Chair of Psychiatry at Beth Israel Deaconess Medical Center (BIDMC) received the 2019 Scientific Research Award from the National Alliance on Mental Illness (NAMI). The award is given in recognition of individuals whose research advances the understanding and treatment of mental illnesses.

One focus of Keshavan’s research is to understand the neurobiological basis of psychotic disorders. Keshavan is a Principal Investigator on a six-site NIH-funded study that seeks to identify biomarkers that are common to two major mental disorders – schizophrenia and bipolar disorder – and that may distinguish between them. He also collaborates with colleagues at BIDMC and Massachusetts General Hospital to characterize sleep changes in patients with psychosis and in adolescents at genetic risk for schizophrenia.

Keshavan and colleagues also have been developing early intervention strategies, including cognitive enhancement therapy (CET) for improving cognitive deficits in patients with serious mental illnesses at the Massachusetts Mental Health Center. With support from a large grant Keshavan received from the Patient-Centered Outcomes Research Institute (PCORI), CET will now be implemented across several clinical sites in New England.

Along with BIDMC’s John Torous, MD, Keshavan’s group has developed the Digital Care Assessment Research and Education (D-CARE) Program which seeks to develop and implement smartphone based programs for learning, assessment, management and prevention for people with mental disorders.

Keshavan was recently named the Academic Chair of the Department of Psychiatry at BIDMC and holds the Stanley Cobb Chair of Psychiatry at Harvard Medical School. He is a senior academic advisor at the Massachusetts Mental Health Center, which provides clinical services under the auspices of the state’s Department of Mental Health. He co-directs the neuroscience, critical thinking and public psychiatry courses for Harvard Medical School residents. He also mentors psychiatry residents, other trainees, fellows and faculty as they obtain first-hand experience in biological psychiatry research.