In a recent groundbreaking study, a team of researchers led by BIDMC’s Dipak Panigrahy, MD, demonstrated that dead and dying cancer cells killed by conventional cancer treatments paradoxically trigger the inflammation that promotes tumor growth and metastasis. Now, in a follow- up study published in January in Proceedings of the National Academy of Science (PNAS), Panigrahy and colleagues illuminate the mechanism by which debris generated by ovarian tumor cells targeted by first-line chemotherapy accelerates tumor progression. Additionally, the researchers describe a novel approach to suppressing the chemotherapy-induced tumor growth.

“Conventional cancer therapy is a double-edged sword – the very treatment meant to control cancer is also helping it to survive and grow,” said Panigrahy, Assistant Professor of Pathology in the Department of Pathology and a Scientist at the Cancer Center at BIDMC.  “To prevent tumor recurrence after therapy, it will be critical to neutralize the inherent tumor-promoting activity of therapy-generated debris.”

Panigrahy and colleagues’ analysis revealed that chemotherapy-killed ovarian cancer cells induce surrounding immune cells called macrophages to release a surge of immune-related chemical compounds – cytokines and lipid mediators – that create optimal conditions in which tumors can survive and grow. Next, the team showed that a common anti-inflammatory drug called a dual COX-2 inhibitor to block that surge of tumor-friendly cytokines and lipids.

“The role of these chemotherapy-induced cytokines and lipids is underappreciated and poorly characterized, and ovarian cancer patients may benefit from suppressing their release,” said Panigrahy. “Further research is needed but, dual inhibition of the COX-2 pathways is a novel therapeutic modality that may compliment conventional cancer therapies by acting as a surge protector against cell debris-stimulated tumor growth.” 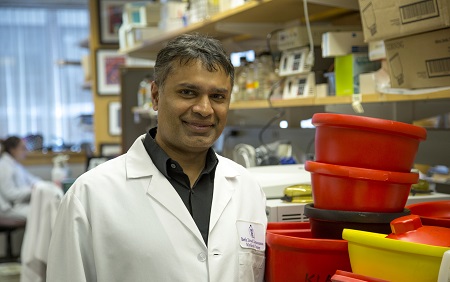