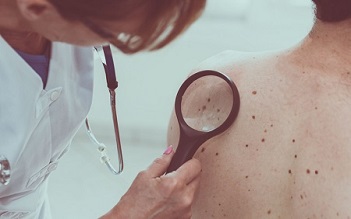 Diagnosed more frequently in the United States than all other cancers combined, skin cancer will affect one in five Americans by the age of 70. Atypical moles – larger moles of irregular shape and color – can be challenging to examine and monitor given that they can mimic melanoma. Because patients with atypical moles are at an increased risk for melanoma, atypical moles with any suspicious features are often biopsied and given a grade describing the degree of abnormality.  There is little data about clinical outcomes and the risk these moles pose long term, so no guidelines for management for dysplastic moles biopsied with positive histologic margins exist. Dermatologists are divided about the optimal management strategy; half of experts favor a second excision procedure and half prefer to monitor the biopsy site.

To address the lack of evidence, a national team of researchers within the Pigmented Lesion Subcommittee/Melanoma Prevention Working Group of the Eastern Cooperative Oncology Group/Southwestern Oncology Group led by chair, Caroline C. Kim, MD, in the Department of Dermatology at Beth Israel Deaconess Medical Center (BIDMC), examined outcomes of patients with moderately dysplastic moles that had been excisionally biopsied with positive histologic margins for a mean of nearly seven years. In all, out of 467 cases treated at nine U.S. academic medical centers, none went on to develop melanoma at the site of the excised mole; however, more than 22 percent of patients subsequently developed melanoma at a separate site. The findings, published in JAMA Dermatology on October 10, suggest that dysplastic moles – known by their Latin name “nevi” in medical terminology – are not necessarily precursors to melanoma, but rather, are a risk factor for melanoma.

“Our study is the largest study to date examining outcomes of moderately dysplastic nevi and carries significant clinical impact, as the insufficient quantity of prior data on outcomes and lack of clinical guidelines have led to much variability across the country in clinical management of these lesions,” said Kim, who is director of BIDMC’s Pigmented Lesion Clinic and Associate Professor of Dermatology at Harvard Medical School. “Our findings provide evidence that clinicians can move forward with close clinical observation rather than re-excision of moderately dysplastic nevi with positive margins. Our data also underscores the need for continued screening of patients with dysplastic nevi for future risk for melanoma.”

The team plans to bolster their findings with future prospective studies that will include greater numbers of cases. In addition, Kim notes that BIDMC’s Pigmented Lesion Clinic is one of only several clinics across the country using total body digital photography to monitor complex patients with atypical/dysplastic nevi, a technology Kim and colleagues will leverage as they continue to optimize patient care.