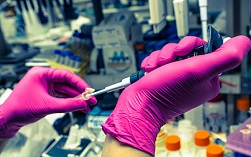 With more than 35 million people worldwide living with the virus and nearly 2 million new cases each year, the human immunodeficiency virus (HIV) remains a major global epidemic. Existing antiretroviral drugs do not cure HIV infection because of the virus’s ability to become dormant, remaining present but silent in immune cells. Known as the latent reservoir, these infected cells – where HIV remains hidden despite antiretroviral therapy (ART) – can become active again when medication is discontinued or not taken as directed.

“The latent viral reservoir is the critical barrier for the development of a cure for HIV-1 infection,” said Dan H. Barouch, MD, PhD, Director of the Center for Virology and Vaccine Research at Beth Israel Deaconess Medical Center (BIDMC). “One hypothesis is that activating these latent reservoir cells may render them more susceptible to destruction."

In a new study published in Nature today, Barouch and colleagues demonstrate that administering broadly neutralizing antibodies (bNAb) designed to target HIV in combination with agents that stimulate the innate immune system delayed viral rebound following discontinuation of ART in monkeys. The findings suggest that this two-pronged approach represents a potential strategy for targeting the viral reservoir.

Barouch and colleagues studied 44 rhesus monkeys infected with an HIV-like virus and treated with ART for two and a half years, starting one week after infection. After 96 weeks, the animals were divided into four groups. One group – the control group – received no additional investigational treatments. Additional groups were given only an immune stimulating agent or only the antibodies. A fourth group was given the immune stimulant in combination with the antibodies. All animals continued ART treatment until it was discontinued at week 130, at which point the scientists began monitoring the animals’ blood for signs of the virus’s return, known as viral rebound.

As expected, 100 percent of animals in the control group rebounded quickly and with high peak viral loads, as did nearly all of those given only the immune stimulant. But among those given the combination therapy, five of 11 monkeys did not rebound within six months. Moreover, those that did rebound showed much lower peak viral loads compared to the control animals. Animals given only the antibodies demonstrated a detectable but modest delay in rebound.

“The combination of the antibodies and the immune stimulant led to optimal killing of HIV-infected cells,” said Barouch, who is also Professor of Medicine at Harvard Medical School. “Together, our data suggest a mechanism by which the combination therapy stimulated innate immunity and rendered infected cells more susceptible to elimination. This study provides an initial proof-of-concept showing a potential strategy to target the viral reservoir.”

This study is the result of a collaboration among researchers at BIDMC, Harvard Medical School; the Ragon Institute of Massachusetts General Hospital, MIT and Harvard; University of Massachusetts; Bioqual; and Gilead Sciences.