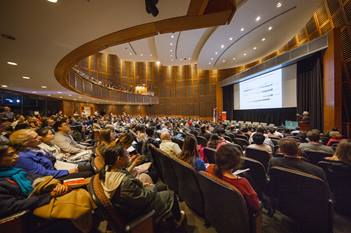 The 11th Annual BIDMC Standard of Cure Cancer Symposium, presented by the Cancer Center at Beth Israel Deaconess Medical Center, captured a new attendance record with more than 600 attendees coming together to learn about the latest in the targeted therapy and immunotherapy cancer research revolution.

The addition of “Standard of Cure” to the event’s name reflects the Cancer Center’s commitment to moving cancer care ever closer to cure through transformative research and clinical practice. Each year’s symposium showcases progress toward this goal by highlighting the latest cancer research findings from BIDMC Cancer Center researchers, as well as nationally and globally prominent researchers from other institutions.

“We are here to learn and inspire ourselves to deliver a standard of cure, not just a standard of care,” said Pier Paolo Pandolfi, MD, PhD, director of the Cancer Center and Cancer Research Institute at BIDMC and host of the annual event.  “We must embrace the standard of cure with a sense of urgency, which is why it is not just the mantra of our symposium, but of our cancer center as well, and this is what we celebrate today – the cure.”

In their lectures, sixteen featured speakers and moderators focused largely on the revolutionary impact of targeted therapy and immunotherapy. In particular, “Immunotherapy in cancer research and care has certainly taken the world by storm,” said Kevin Tabb, MD, CEO of BIDMC, “but there are many issues that remain before immunotherapy can really fulfill its complete potential. That makes this symposium a perfect opportunity to renew our ongoing commitment to the great humanitarian goal of not only treating cancer, but of curing cancer.” 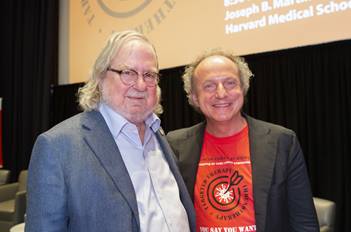 Attendees were surprised during the morning session’s panel discussion by an unexpected appearance of this year’s co-winner of the Nobel Prize in Medicine, James Allison, PhD, of the University of Texas MD Anderson Cancer Center. Allison, who won the award for his pioneering work in tumor immunology, presented this work at the BIDMC Cancer Symposium in 2016.

Allison and other panel members discussed the impacts targeted therapy and Immunotherapy are having in combination with chemotherapy, radiation and surgery. All panel members agreed that combination therapy is the future of cancer treatment but they said it must be based on rational drug trial designs. These trials must be driven by an understanding of the mechanistic basis of drug combinations and their toxicities, they said.

“Not everyone is convinced that combination therapy will work because of concerns over toxicity, but I fully believe combination therapy is the way to go,” said Pandolfi, who facilitated the panel. “I think we have a long way to go to understand it in a systematic way to avoid development of resistance and augment the chances of success. This would include use of genetically engineered mice, more humanized mice, and even more human tissue studies of biomarkers throughout treatment to understand the genetic mechanisms of cancer and the immune system.” 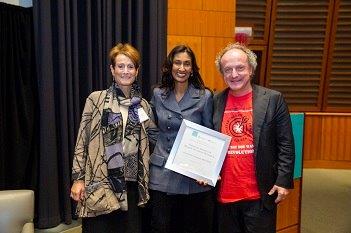 A highlight in the day’s events was the presentation of the Pandolfi Award for Women in Cancer Research, now in its second year, to Padmanee Sharma, MD, PhD, of the University of Texas MD Anderson Cancer Center. The awardee is chosen through a peer-review process to recognize the achievements of outstanding women in cancer research.

Dr. Sharma was introduced by Singer, who is deputy director of the NCI and a renowned tumor immunologist. Dr. Sharma — an oncologist specializing in the treatment of renal, bladder, and prostate cancers — focuses on understanding the complex interactions between tumors and their microenvironments, specifically the immune system. Sharma was the first to observe that anti-CTLA4 therapy increases the frequency of T cells that express the co-stimulant ICOS. She showed that ICOS-positive T cells were necessary for the optimal destruction of the tumor cells and that the ICOS molecule and its ligand ICOS-L are crucial players in optimizing antigen responses mediated by anti-CTLA4 antibody. She continues to identify new therapeutic opportunities in immuno-oncology, such as the VISTA inhibitory pathway in prostate tumors after anti-CTLA4 therapy.

During her award lecture, Sharma spoke about response and resistance mechanisms to immune checkpoint therapy and the need to move between the laboratory and the clinic to expedite positive clinical results. “Immune checkpoint therapy has joined the ranks of surgery, radiation and chemotherapy as a pillar of cancer treatment,” she said. “Multiple checkpoints exist and are dynamic in their expression so they should be evaluated in both pre- and on-treatment human tumor samples to guide therapeutic decisions.” She added that these clinical trials provide a platform to study the biologic effects in patients, which in turn provides insights into the mechanisms that can be targeted for combining therapies. 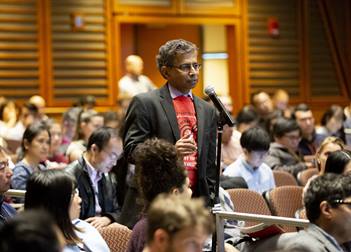 Wulf discussed tumor metabolism-targeting approaches to breast and ovarian cancers with drugs like PARP inhibitors. PARP-inhibition modulates the tumor microenvironment in ways that affect responsiveness to treatment, including enhanced recruitment of cytotoxic T-cells to tumors. “PIK3 inhibition supports the anti-cancer activity of PARP inhibitors, together inducing profound changes in the bioenergetics of tumors,” she said.

In a talk on refocusing the targets of cancer immunotherapy, Boussiotis, who is a Professor of Medicine and Immunologist at Harvard Medical School, highlighted the success of checkpoint inhibitors, particularly those antibodies against CTLA4 and PD1-receptors. “They block T-cell responses and they can both mediate inhibitory effects on T cells which have resulted in remarkable clinical regression in melanoma and other cancer,” she said. She described her work in identifying other strategies PD-1 may use in mediating its inhibitory function in T cells, including a new previously unidentified mechanism involving activation of the tyrosine phosphatase enzyme, SHP-2, and previously unidentified effects of PD-1 in the fate and function of myeloid cells.

Other presentations at the symposium were delivered by keynote speakers Mantovani, speaking about the role of positive and harmful aspects of innate immunity, inflammation and cancer; and Van Dang, presenting on MYC and Oncoimmunometabolism. Solit spoke on the “actionable genome,” and Alan D. D’Andrea, MD, of Dana-Farber Cancer Institute, discussed targeting DNA repair in cancer therapy. Singer discussed the NCI’s Cancer Moonshot as a means of accelerating progress in cancer research. Stefano Piccolo, PhD, of the University of Padua, Italy, presented on YAP/TAZ in stem cells and cancer and Paul S. Mischel, MD, of the Ludwig Institute for Cancer Research, San Diego, presented on the role of extrachromosomal oncogene amplification. 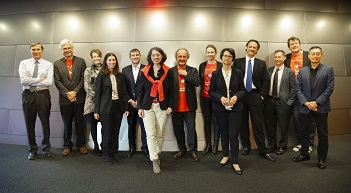