Traffic-Related Pollution Linked to Risk of Asthma in Children 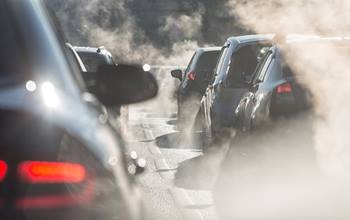 BOSTON – Twenty-five million Americans suffer from asthma, a chronic lung disease that has been on the rise since the 1980s. While physicians have long known that smog and pollution can bring on an asthma attack among children and adults suffering from asthma, researchers remained uncertain about what role long-term exposure to certain pollutants might play in the development of the disease in children.

New research led by scientists at Beth Israel Deaconess Medical Center (BIDMC), the Harvard Pilgrim Health Care Institute, and the Harvard T.H. Chan School of Public Health suggest that long-term exposure to traffic-related pollution significantly increases the risk of pediatric asthma, especially in early childhood. Their findings were published today in a Letter to the Editor in the Journal of Allergy and Clinical Immunology.

“Our previous research demonstrated that living close to a major roadway and lifetime exposure to air pollutants were associated with lower lung function in seven- to ten- year-old children,” said corresponding author Mary B. Rice, MD, MPH, a pulmonary and critical care physician at BIDMC. “We suspected that these exposures would also be associated with pediatric asthma.”

To find out, Rice and colleagues analyzed data from 1,522 Boston-area children born between 1999 and 2002 whose mothers had enrolled in a long-term study called Project Viva, which was established to examine how behavioral and environmental factors – such as sleep and eating habits or exposure to pollution – impact children’s health. As part of Project Viva, mothers provided comprehensive medical, socio-economic and demographic information, including residential address histories.

Rice and colleagues used mapping technologies to determine the distance between each child’s home address and the nearest major roadway. The researchers also linked home addresses to census data and satellite-derived atmospheric data to calculate each participant’s daily exposure to fine particulate matter (PM) – tiny particles suspended in the air that when inhaled deposit in the terminal sacs of the lung.  Fine PM originates from fuel combustion, including traffic, power plants, and other pollution sources.

The research team also examined children’s daily exposure to soot, a component of fine PM also known as black carbon. Incompletely burned fossil fuels expelled from engines (especially diesel) and power plants produce black carbon, which is a known carcinogen and potent contributor to climate change.  In the Boston area, the presence of black carbon is linked to traffic-related pollution – as opposed to other regions where soot may come from a mix of sources.

Further analysis of the geographic data and Project Viva questionnaires revealed clear patterns. Most strikingly, living close to a major road was linked to childhood asthma at all ages examined.

“Children living less than 100 meters from a major road had nearly three times the odds of current asthma – children who either experience asthma symptoms or use asthma medications daily – by ages seven to 10, compared with children living more than 400 meters away from a major road,” said Rice, who is also an assistant professor of medicine at Harvard Medical School. “Even in the Boston area, where pollution levels are relatively low and within Environmental Protection Agency standards, traffic-related pollutants appear to increase the risk of asthma in childhood.”

“Lifetime exposure to black carbon and fine PM were also linked to the asthma in early childhood (ages three to five years), but in mid-childhood (ages seven to 10 years), these pollutants were associated with asthma only among girls.  “Younger children spend a larger proportion of their time at home than school-aged children, and their airways are smaller and may be more likely to wheeze in response to pollution,” says Rice.  “This may explain why pollution exposure was most consistently linked to asthma in young children.

The stronger link between lifetime pollution and asthma among school-age girls was somewhat surprising.  According to Rice, “Future work will need to investigate whether girls are more susceptible to pollution than boys.”