When To Resume In-Person Therapy 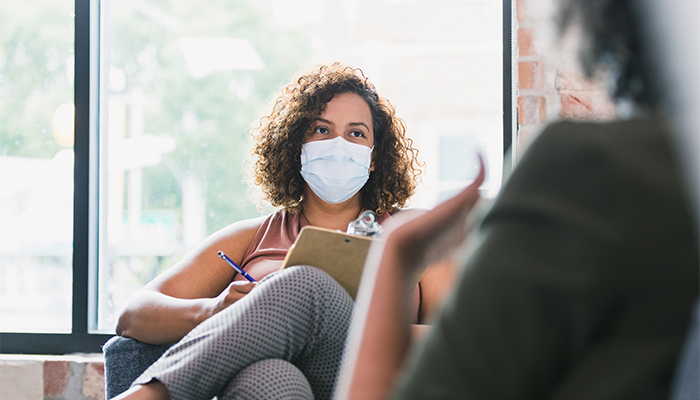 In more than 40 years of working as a psychotherapist, I had never participated in a Zoom session until March 2020. There have always been occasional people who preferred or needed telephone sessions, but everyone else came to my office. During my years at BIDMC, this meant that I sometimes met with people who had come to Hematology/Oncology for a medical appointment and/or chemotherapy, or with people who came in only to meet with me. When I retired from the hospital, I began to meet with people in my home office.

It was surprising to me how different it was to sit with people away from the hospital. Although I had worked hard to make my office on Shapiro 9 as comfortable and non-medical as possible, it was in the middle of the Oncology Unit. A quilt on the wall, a basket of rocks to share, and pictures could not take away from the hospital realities of odors, sounds, and associations. In my new away-from-the-hospital work life, there was none of that.

Although I had some initial misgivings about having my office in my home and, thereby, sharing much more about my personal life, it was wonderful. There was never an inappropriate question or comment, and most people appreciated the homey comfort. I have often thought about how the work was different in the two spots. At BIDMC, it was impossible to avoid the physical realities, and cancer was always part of the conversation. In my home office, sometimes we never talked about illness and focused more deeply on interpersonal issues.

This was going well until everything changed and the world slammed shut in March 2020. One day, I had five clients in my office, and the next day and all the days to follow, none. I clearly remember the first few weeks of trying to talk with people through a computer screen; it was strange and uncomfortable for us both. First, I struggled with choosing the right program that would protect confidentiality and was likely to work; there were many glitches. Some of us were more adept with technology than others, and we helped one another.

It was generally easier when I already knew someone well and always more difficult when meeting someone for the first time. There is so much that we learn about each other just by being in the same space. When we only see one another from the shoulders up, it is harder. For example, I remember talking with a man, whom I have never met in person, who was discussing the issue of height. Due to his multiple myeloma, he had lost a few inches, and spoke eloquently of how especially hard this was in his family. With a little embarrassment, I had to ask him how tall he is; I had no idea if he was  5’2” or 6’3.”

In a study published by the American Psychological Association in June 2020 (taken before the pandemic), just 1% of respondents said they were seeing all of their patients remotely. A later study (taken during the pandemic) found that 64% were only seeing patients virtually, while 32% reported a mix (both virtually and in-person). Personally, I don’t know any therapists who continued regularly to see clients in person during the early months. Some resumed with outdoor meetings during the summer, and more are now offering both kinds of appointments.

Earlier studies (pre-pandemic) found that in most cases telephone and video therapies were just as effective at treating many common issues, like anxiety, depression, and post-traumatic stress disorder, as in-person therapy. A study published in February 2021 concluded that compared with in-person meetings, phone and video treatments were just as effective in treating veterans dealing with trauma, depression, and other mental health problems. No doubt there will be more attention paid to these questions in the months ahead as we all consider how best to practice.

Like most therapists and many patients, I am unsure how to best proceed now. A few people are eager to return to in-person visits, but most have adapted well and appreciate the ease of talking from home and eliminating the travel time. I met with one longtime patient in person over the summer, sitting on the front porch; it was fine, but nothing that has been repeated.

At the moment, I am taking my cues of the rules in medical settings. At hospitals and other medical facilities, masks are still required. Trying to meet with someone while wearing a mask feels much more difficult than Zooming. We need to at least see one another’s faces. It would be nice to someday again be able to hug someone or even to share a comfortable silence together. But I know that I am not yet ready.