A study in Cancer confirms what many of us already knew. Although almost everyone who has had breast cancer worries about the possibility of a recurrence, young women generally worry more and worry longer. It used to be believed that breast cancer was a more dangerous disease when it occurred in young women, but that theory has been debunked. Now we know that breast cancer, when matched stage to stage, carries the same prognosis statistics for women of any age. That is not the reason for this finding.

Young women with breast cancer (or with any kind of cancer) are grieving their losses and fearing for their futures.

The study included 965 women who had stages 0 to III breast cancer and were part of the Young Women’s Breast Cancer Study. This prospective study enrolled women who were 40 or younger at the time of their diagnosis and followed them for five years. The majority of these women had moderate or high recurrence fears that diminished over time, while 6.9% of the participants had moderate FCR (fear of cancer recurrence) that worsened as time passed and 21.7% had high FCR that stayed high over the years.

The study concluded that, although FCR improves over time for most young women with breast cancer, approximately one third had severe FCR that did not improve or even worsened over the five years. The recommendation was that all young women be closely monitored and that referrals to mental health professionals should be made when appropriate.

Let’s unpack this study. My comments are based on my forty years of experience and knowing so many wonderful women, younger and older, who are living with breast cancer. The most important point is that everyone worries. In many ways, it does not seem to matter much what the details are of the diagnosis. Women who have DCIS (stage 0) are often as scared as women with a more serious diagnosis. News of a cancer diagnosis, regardless of the particulars, is inevitably accompanied by fear and sadness.

As the study suggests, most women feel more secure as time passes. Almost always, women with early breast cancer gradually believe that they will likely stay well. For all of us, it does not take much to rattle the fear: reading of a celebrity’s death from cancer, knowing someone who had a recurrence, and preparing for a medical visit or an annual mammogram all increase our anxiety. I often remember a conversation in the waiting room; I had stopped to greet a woman who was there for a routine follow-up with her oncologist. As I asked how she was, she burst into tears: Today is the third anniversary of my diagnosis. What if I only have five years? Postscript: she is fine twenty years later.

There are a number of things that are likely to be harder for younger women. An obvious comment is that worrying about mortality is out of sync with life at 30 or 35. It is very tough to be worrying about living to see your children finish kindergarten when your peers are thinking about when they can afford a new car or a special vacation. Young women often feel very alone with their cancer.

Younger women are likely, too, to be less financially secure, to be still working on professional growth, and maybe to be looking for a life partner. To imagine being robbed of all the expected years ahead is terrifying and heartbreaking.

Another obvious issue is fertility and family planning. If a young woman already has children, she is distraught by the possibility of leaving them motherless. If she has not yet had her family, she is upset by the likelihood of never having those choices. Single women who want to be partnered or married are afraid that no one will want them post cancer. They recognize that their bodies have been changed and that they have been through a crisis that others may have avoided for decades.

In summary, young women with breast cancer (or with any kind of cancer) are grieving their losses and fearing for their futures. Nothing seems secure, and they have not yet had enough life to trust that things always change and usually get better. Their fear is real and legitimate and much harder to alleviate. 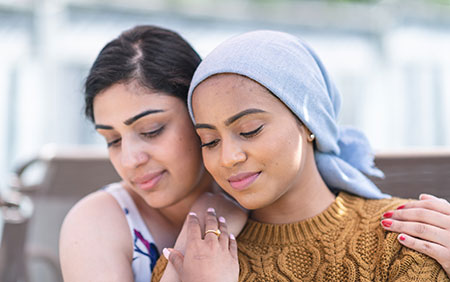 Considering a Baby After Breast Cancer