Cancer Statistics: Don't Get Hung Up on the Numbers

How many questions have you asked your doctors about your future? Was your immediate thought, when told you have cancer, something like: How long do I have to live? Did or do you really want to know?

Whenever I speak with my patients about this important question, I remind them not to ask a question unless they are sure that they want to hear the answer. In this instance, I also remind them that no doctor really knows the answer. S/he can give you an educated best guess, but it is only a guess. If you are intent on something more specific, a better question could be: What is the worst case? And what is the best case? That could give you a range, based on your doctor's experience and knowledge, of what might happen.

When I learned about the eight-month median, my first intellectual reaction was: Fine, half the people will live longer; now what are my chances of being in that half?
Stephen Jay Gould, PhD (1941-2002)
Evolutionary Biologist and Natural Historian

Sometimes it is important to have at least a general idea of prognosis. If you have children or other family members to prepare and plan for, if you have a business to manage or legal/financial planning to complete, it is helpful to have some kind of calendar.

Statistics are important, of course, and many of us want to know where our cancer situations fit in the prognostic world. I have never been a big believer in those statistics because I have known so many people who confounded them on both ends. There are, sadly, people who are diagnosed with what seems to be an early stage cancer, but who die from their disease. On the other side, there are many people who begin cancer treatment with a scary and dire situation and go on to live long and healthy lives. We never know. It is easy to say that, for any one of us, the survival is either 100% or 0%, but most of us need some other way to look at it.

In my mind, the best way is Stephen Jay Gould's classic essay: The Median Isn't the Message. This is especially on my mind today as I have just met two new clients who are terrified by the statistics related to their particular cancer diagnoses. It is always important to remember that we are all "an N of 1," but I think that reading Dr. Gould's essay is even more empowering.

Dr. Gould was an evolutionary biologist who was diagnosed with peritoneal mesothelioma, a lethal form of cancer that carries a median mortality of eight months. Because he was a scientist, he immediately pondered those dire numbers and reminded himself that median means that half of the people will die before then and half will die later.

In any curve, there are people at both ends, both the lucky end and the unfortunate one. He thought especially about the people who were at the lucky end and wondered how they got there and what their shared luck was about. It is impossible to really know, but he was determined to get into that group. And he did. Although I suspect that no oncologist ever used the cure word, his cancer never progressed, and he died many years later of an entirely different kind of cancer.

It is all too easy for all of us to get hung up on numbers. His essay is the perfect antidote both to people who believe that statistics don't matter and to those who are convinced in their accuracy. It is especially distressing, as a patient, if your doctor falls into the latter group and may consign you, even just in her/his head, to the unfortunate end of the curve. We all do better with hope, and his essay can give you real understanding and a genuine reason to be hopeful — no matter what the statistics may say.

If you have never read his essay, The Median Isn't the Message, this is the time to do so. If you have already read it, read it again.

What do you think about statistics? Do they comfort or scare you? Join the BIDMC Cancer Community and share your thoughts.

Is a Cancer Survival Rates Website a Good Idea?

Read More About Is a Cancer Survival Rates Website a Good Idea? 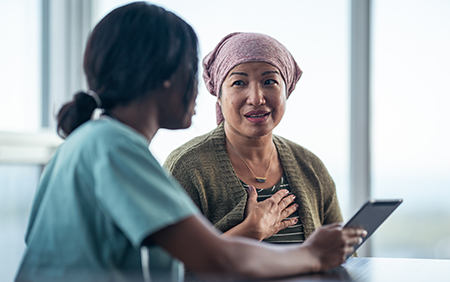