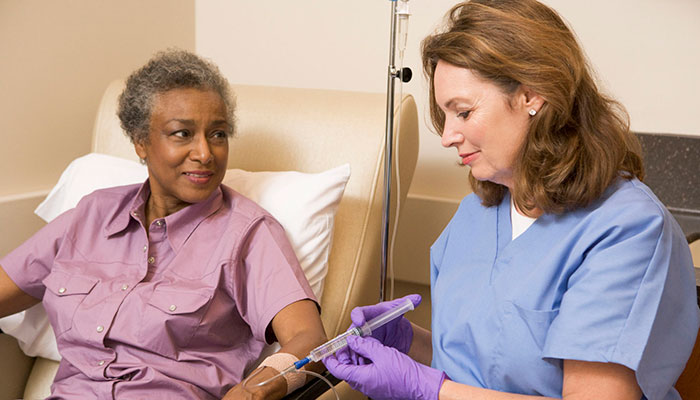 A recent study in JAMA, the Journal of the American Medical Association, supplied more evidence that sometimes chemotherapy prior to surgery may make a lumpectomy, rather than a mastectomy, possible. In the study, about half of the women, who had not initially been eligible for the smaller surgery, gained that option by first having chemotherapy. Interestingly, 44% of them opted anyway for a mastectomy.

Why is chemo sometimes given first?

There are two general reasons for this strategy:

The first reason is much more common, and, increasingly, women with large tumors (or larger tumors in a small breast) hear a recommendation to begin with chemotherapy. Giving chemo this way is called neoadjuvant chemotherapy.

This study, called the BrighTNess trial, looked at the addition of the PARP inhibitor, veliparib, to the standard chemotherapy (Taxol and/or carboplatin) before surgery for early triple negative breast cancers. As you know, triple negative breast cancers are those that are HER2, estrogen, and progesterone negative. This means that they will not be helped by Herceptin or any of the hormonal therapies. The theory is that PARP inhibitors prevent the natural repair of both healthy and cancer cells by PARP enzymes during treatment. By making it impossible for those enzymes to do their job, the hope is that more cancer cells will be eliminated.

When a woman completes neoadjuvant chemotherapy and has surgery, the pathologists examine the removed tissue to look for any remaining cancer. This can be an effective way to understand if the drugs have done their job. The hope, of course, is to find no cancer cells and be reassured that the chemo drugs were helpful. I know a number of women for whom this has been true. Since most of us, who had surgery before chemo, never have the chance to know that the drugs were useful, they were very appreciative of this information.

I have recently been working with a woman who went through this treatment, but learned that her tumor had actually grown through chemo. In her case, this meant both that a mastectomy was necessary and that more chemotherapy would follow the surgery. As disappointed as she was by this outcome, it was reassuring in an odd way. If she had gone through surgery first, she would never have known that the drugs had not done what had been hoped, and there may have been other cancer cells remaining in her body. Instead, she was able to have additional treatment that likely was useful.

Returning to the study and its results, I am most interested in the fact that almost half of the women, in spite of the successful shrinkage of their breast tumors, opted for a mastectomy. Of course, this was their right, and I always support a woman's choice. My experience has been that we know ourselves well, and make the best personal decisions. My worry, however, is that women don't fully understand the facts and/or the implications of their preferences. In almost all cases, either a mastectomy or a lumpectomy will give a woman the same odds of staying healthy. That means that the surgical choice rarely impacts survival. In the cases where it might matter, our doctors will clearly say so and make that recommendation. My fear is that, acting out of completely understandable anxiety, a woman may choose to lose her breast and think that she is upping her odds of staying well. It is up to our doctors to be very honest and clear about the facts and our choices, and it is then up to us to make a thoughtful choice.

Did you have neoadjuvant chemotherapy? Did it change your surgery? Join the BIDMC Cancer Community and share your story.