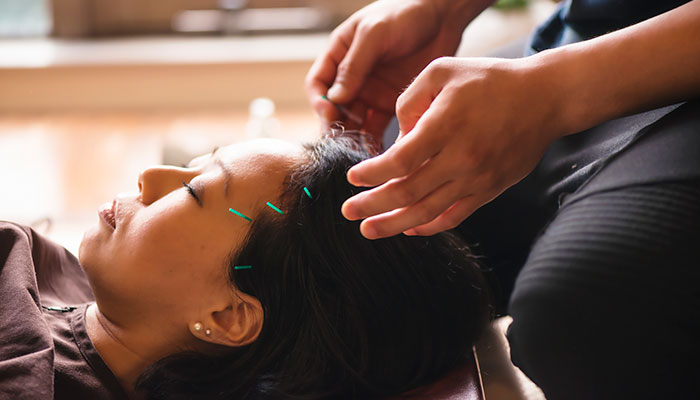 Many cancer patients and survivors use some kind of CAM (complementary and alternative medicine) to reduce treatment side effects or cancer symptoms. Others find a treatment helpful in enhancing an overall sense of well-being and minimizing anxiety and distress. These treatments can include acupuncture, massage, Reiki, hypnosis, meditation, and yoga in addition to a long list of supplements and vitamins. The usual medical advice is to talk with your doctor before adding anything that you ingest while you are on active treatment. Since there have not been rigorous studies to explore possible interactions of supplements and chemotherapy, there is concern about a possible negative impact. The second piece of standard medical advice is that any external therapy that helps you feel better is fine.

Acupuncture originated in China and has been in use to treat many conditions for more than 3,000 years. Per the National Cancer Institute, “acupuncture applies needles, heat, pressure, and other treatments to certain places on the skin, called acupuncture points (or acupoints) to cause a change in the physical functions of the body.”

Over the years, I have worked with many people who have benefitted from a number of CAM treatments. Right now, I am working with a woman who has a great deal of pain from Stage IV breast cancer; in addition to her oncologist, she works closely with a practitioner who prescribes several supplements to reduce inflammation. Her oncologist has accepted her choices, and she is convinced that the supplements make an enormous difference in how she feels. I am also currently working with people who use other forms of CAM, most commonly acupuncture. Many of my patients, past and present, have been firmly convinced that acupuncture helped with pain, nausea, hot flashes, neuropathy, and anxiety.

A recent large clinical trial, reported in JAMA Oncology, tested two types of acupuncture to treat chronic pain in survivors of breast and prostate cancers and lymphoma. One was the common variety, and the other a less well-known form of acupuncture called auricular or battlefield acupuncture. The latter was developed by the VA and has the advantage of being easy to teach clinicians to administer. It involves placing up to five sterile stud-like needles in each ear and asking the patient to walk around for a minute. Many experienced immediate pain relief. People who received standard acupuncture reported slightly better pain control than those who received auricular acupuncture. Of note, both groups felt better than those who had neither type, and the improvement in pain control lasted for up to four months.

It is generally reported that 30-40% of cancer survivors live with some form of chronic pain. For many, that pain is rather minor and fairly easily managed or even ignored. Others are truly impaired by the pain, and many try various kinds of pain medications. The trouble, of course, with almost all meds is that there can be side effects as well as symptom improvement. The downsides of opioids are well-known, and ongoing use of common anti-inflammatory drugs can cause kidney damage or GI bleeding. Therefore, any non-pharmaceutical treatment, like acupuncture, can be extremely beneficial.

It is important to note that CAM approaches to pain management, including acupuncture, have been criticized by some researchers. Criticisms have included pointing out deficiencies in the studies, the variability of practitioners’ skills and of the practice itself. Some studies have reported success in pain management and nausea control while others have been less positive. One common concern is that there has been limited research on any kind of CAM treatments and significant scientific gaps exists in our knowledge base.

It is unfortunate that many medical insurances do not cover acupuncture. However, some do, so it is worth an inquiry. If yours does not, there are ways to find less expensive trained acupuncturists. Some medical centers have them on staff, and there are schools where you can be treated by supervised students. Since many people have found acupuncture helpful in treating cancer symptoms or side effects of treatment, and since there are few to no negative side effects, acupuncture is worth careful consideration.

Have you used acupuncture for pain or other symptoms? Join the BIDMC Cancer Community and share your story.